How Many Types Of Tents Are There? 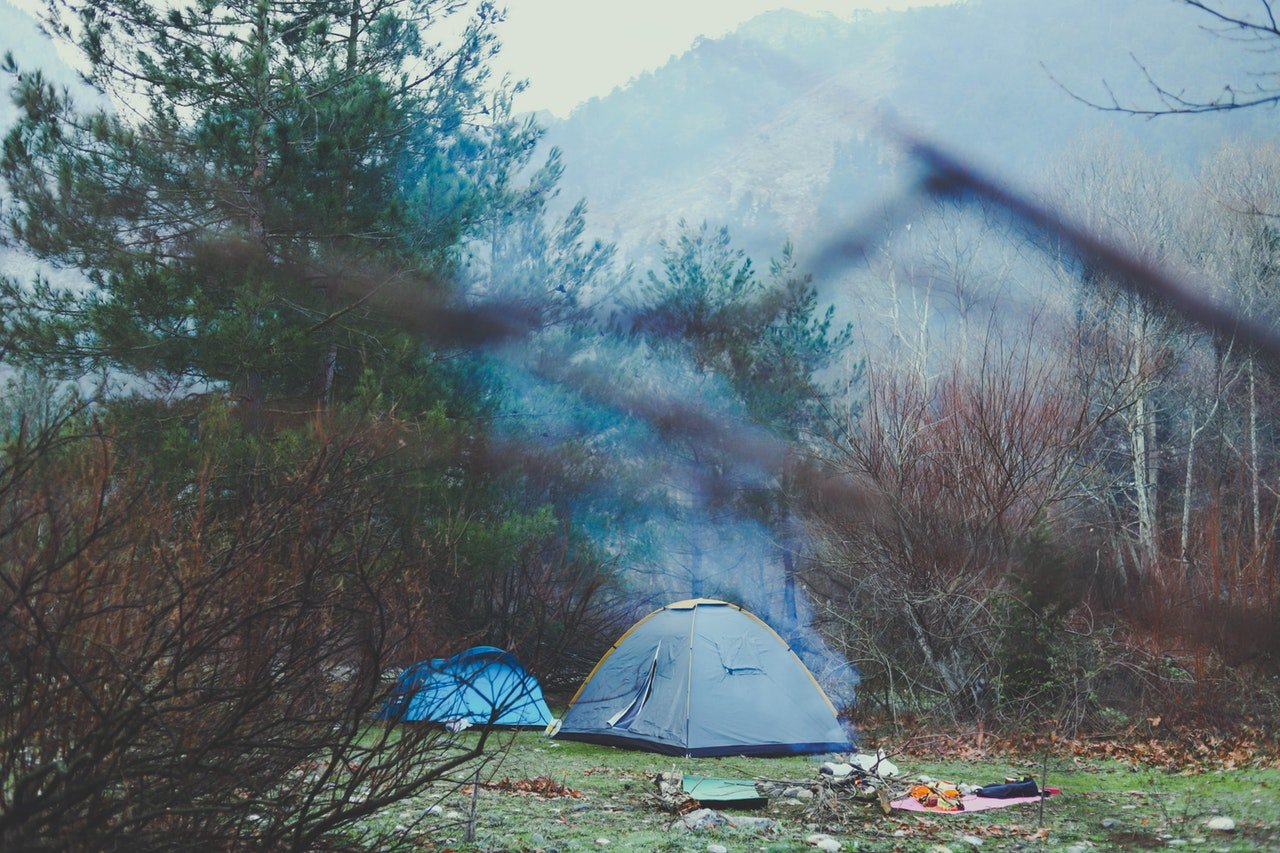 All of these tents have pros and cons, though. Some are better for family camping, some for backpacking, and other for harsh weather. Ahead, we’ll take a look at all of the different types of tents, where they excel, and where they fall short.

The ridge tent is one of the types of tents you can probably pick just by looking at it. This is the classic-style tent that forms a triangle in the middle. Two poles hold it in place in the middle, forming the classic design you’ve probably seen before.

While there are a few different sizes of ridge tents, the room under the hood won’t give you too much space. These are better options for those who plan on sleeping alone in the tent, rather than moving around or hanging out.

The best part of the ridge tent is its sturdiness. It’s tough to knock this one over, even when the wind is howling, and the rain is pouring. This tent is also very easy to set up, so it’s better for those who need a quick option for camping.

The tent can be a bit heavy if you’re hiking, though, and there isn’t a lot of room to keep your things. Although this is one of the classic types of tents, there are usually some better options out there.

Dome tents have largely replaced ridge tents on the market. They’re much easier to find, especially if you’re looking for replacement parts.

These tents are characterized by their two flexible poles. The poles arch over the top of the tent and rest on the ground, making a “dome” shape.

This is a good tent option for hobby campers. The dome style gives you a lot of room to walk around. You can buy them in several sizes, and even combine two of them for a group camping experience.

Dome tents are easy to set up and take down, and relatively light to carry around. They’re cheap as well, and will probably be the first choice of someone going on their first camping trip.

The biggest negative with these tents is their ability to stand up to harsh conditions. They will blow around, and one of the poles will likely come loose, leaving you to wake up in a collapsed tent. The durability also fluctuates, and the cheaper options are prone to leaks, rips, and zipper malfunctions.

Pop-up tents are, without a doubt, the easiest type of tent to set up. You will open it up, tie it down, and be ready to sleep the night.

Pop-up tents are better for unconventional sleeping than they are for true camping. They’re great for things like festivals, but don’t always do well when you’re going on a camping retreat.

While these tents present the easiest option for new campers, they’re usually a bit pricier than traditional dome tents. They are also far less durable than most other options and will rip at the slightest sense of pressure.

You won’t have much room, here, but not everyone needs a roomy tent. Pop-up tents are more of a niche product than a widely-used camping option.

A tunnel tent is a great option for those who want a single tent for the whole group. Their size makes them ideal for family outings.

These tents are relatively easy to set up, despite their size. They provide a lot of space for people and storage, and won’t get too crowded when people are walking around.

Like a lot of other types of tents, the tunnel tent is best for a specific type of camping. The tunnel tent is perfect when you’re bringing the tent from your car to the designated campsite with your family. It’s heavy and large, though, which means you won’t be able to lug it around on a hike or pitch it in restricted areas.

The ventilation of the tunnel tent isn’t the best, either. It can get a bit stuffy when multiple people are sleeping within. As you can probably guess, tunnel tents aren’t the best at standing up to wind, either.

Inflatable tents will be one of the more niche types of tents on this list. They’re new, expensive, and rare to see when you’re camping.

As you can expect, these tents are the easiest to pitch. All you have to do is set the pegs and pump the tent full of air. There are no poles or any other setup steps required.

An inflatable tent has the same drawbacks as a tunnel tent. It’s large and heavy, which means you’ll need a lot of space and won’t want to carry it very far. These tents are also quite expensive, so they won’t work for someone looking to camp on a budget.

As the name suggests, backpacking tents are ideal for hikers and backpackers who need a place to spend the night. They’re lightweight, small, and easy to set up. There’s no standard design for a backpacking tent, and you can find one that best fits your sleeping specifications.

There isn’t much space inside a backpacking tent. These are designed to minimize weight, so you’ll only be able to fit yourself and a backpack inside. The tent is low to the ground, though, so you won’t experience much of a problem with harsh winds.

Those who are hiking or backpacking long distances will want to pick this tent. There are better options if you’re staying at a campsite, however.

The Geodesic tent is for hardcore climbers and campers who often find themselves in inclement weather. The style of the tent is similar to that of a dome tent, but there are more poles required for it to keep its form. These additions make geodesic tents a bit more difficult to set up but also makes them much sturdier and more durable.

There’s a good amount of headroom in a geodesic tent, but there’s not enough room for multiple people to sleep comfortably. The tent can also be a bit heavy if you’re lugging it around, but you can buy a semi-geodesic tent if you want to drop some weight.

These tents can be quite expensive, so they’re better for those who need the extra durability. A dome tent will fit the needs of most other campers.

A Vis-à-vis tent is a French design that’s segmented into different rooms. This is one of the larger tents you can buy and is ideal for family or group camping trips.

The center of the tent will be the main room and is rather large. From there, you will have a few separate areas where people will sleep. This is the kind of tent you’d choose if you’d want to do some luxury camping.

The negatives with this tent are apparent. It’s large and heavy so you won’t want to carry it too far. The tent is also expensive and difficult to set up, which can lead to a headache if you have some small children running around.

A pod tent is relatively similar to a vis-à-vis tents since they’re segmented and center around a middle, common area. Each room will have its own door as well, which improves privacy. These tents are great for families or large camping parties.

Of course, the downsides of a pod tent are similar to a vis-à-vis tent. It’s heavy, expensive, and very difficult to set up.

The tent covers such a large area that it’s nearly impossible to use if you don’t go to a designated campsite. A lot of these places will charge extra for such tents as well because they take up so much space.

Bell tents will be one of the types of tents you’re least likely to see, but they’re still worth including. They look a bit like a wide teepee, and the canvas panels allow you to light a fire inside.

A bell tent is far more of a luxury selection. They’re large and comfortably fit multiple people. You can even stand up inside without an issue.

These tents are only useful in specific circumstances, though. They are designed for warm, summer months and easily let the air inside. Harsh winds will blow them over quickly as well.

A cabin tent is another option for those who want a bigger tent. They don’t cover as much ground as a pod tent but can still fit multiple people inside. Some will even have dividers that separate the sections into rooms.

Like the other large tents we included, cabin tents are costly, heavy, and difficult to set up. They don’t hold up well in harsh conditions but will be a good choice for families or camping parties who don’t want to spring for a vis-à-vis or pod tent.

A hammock tent is pretty self-explanatory: it’s a hammock with a roof. You’ll need to find two, sturdy trees that are far enough apart, but you’ll be golden other than that. These can hold up in rainy conditions, and some will even prefer them. You don’t have to sleep on the wet ground and hope your tent doesn’t leak.

The only downside to hammock tents is that there isn’t anywhere to keep your stuff. You’ll have to leave it somewhere else and risk getting it wet.

A pyramid tent looks a lot like a teepee. They’re usually small, simple, and easy to set up. You only need one pole in the middle with lines connected to the ground to make the pyramid shape.

Pyramid tents are good for one person. They’re small, but they’re light and aren’t too expensive either. Most pyramid tents don’t come with a ground cover, though, so you’ll have to sleep on the grass or dirt. This can be uncomfortable in some situations, and you won’t be able to use it if the ground is wet.

Bivy tents present another option for those who are hiking or backpacking. They are small, low to the ground, and lightweight. There isn’t much to these tents. They’re usually inexpensive and easy to set up. They don’t have much space inside, though, so they’re only meant for sleeping.

Those who want to bring a tent with them on a hiking trip would be happy with this type of tent. There are better selections for recreational campers, though.

Car-top tents are something you might not realize exists. They sit atop your roof rack and connect to the ground with a ladder. There’s no standard design for car-top tents but are usually quite cheap and easy to set up.

Most of the time, these tents are for people who are traveling long distances. You might want to lie down to sleep instead of staying in your car, and there isn’t always a place to camp.

Beach tents are basically a tent that’s missing a side. They’re good for summer days and will protect you from the sun, but you won’t want to bring one of these with you on a camping trip.

Most of the time, these tents will be a dome tent style, making them easy to set up and store. There aren’t a ton of uses for a beach tent, but it will be there when you need it.

We wanted to include canopies on this list since they’re technically part of the tent family. They sit on a frame and only cover you from above.

You obviously don’t want to sleep under a canopy on a camping trip, but they’re great for backyard parties. They will protect you and your guests from the rain, or provide a nice shady area where you can serve the food. You can even bring one of these with you to a campsite for a “common area” feel.