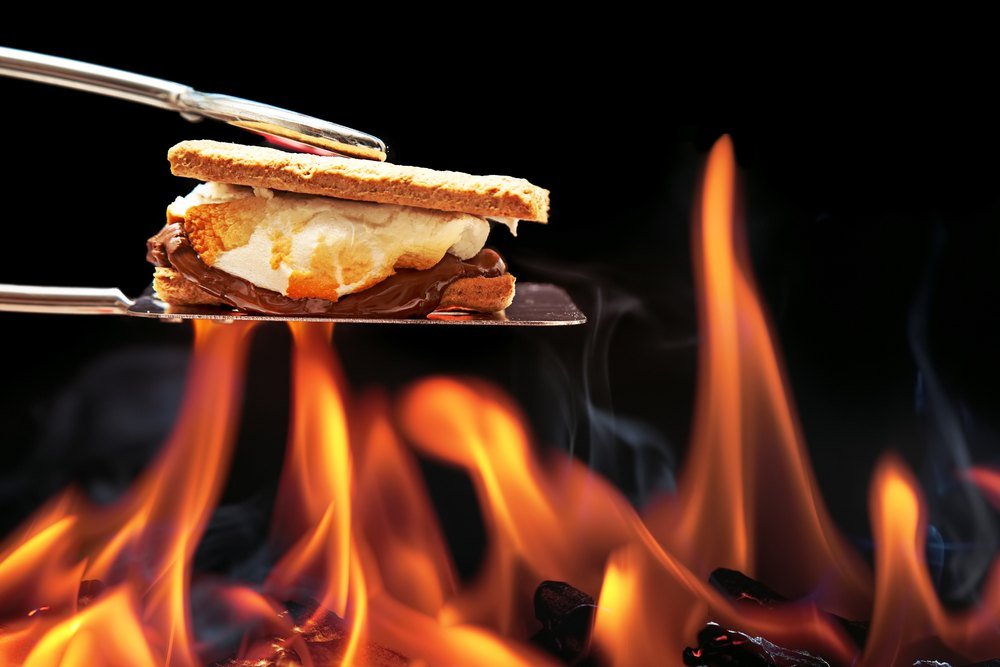 Are you tired of the same old boring desserts? Do your dinner guests already know what to expect when they complete their meal? It might be time to change it up a bit. You can make many creative concoctions using one of America’s favorite treats: s’mores!

This post will give you a brief history of s’mores so that you can impress your audience with your esoteric culinary knowledge. We will also give you some fun ideas that will help you bake desserts that are inspired by the tasty treat.

If you believed that s’mores were created as a snack to enjoy while camping, you would be right. However nobody knows who actually invented it. The recipe for s’mores was first published in 1927. It was featured in an edition of “Tramping and Trailing with the Girl Scouts.”

Not only do we not know who invented the snack, but the origin of the name is also uncertain. It is believed that the name is a shorter version of “some more,” which is undoubtedly what kids said when they finished their first s’more!

Pretty much everyone knows how to make s’mores. It is simply melted chocolate and marshmallows sandwiched between two graham crackers. People typically make s’mores over campfires. While that is the familiar recipe, there is more than one tasty s’more recipe out there.

S’mores have also become a popular part of our popular culture. You have probably seen them in movies and other forms of entertainment. Who can forget that scene in The Sandlot when the main characters were sitting around a campfire munching on these treats?

The s’more has become so popular that it even has its own “holiday.” National S’mores Day is held on August 10. People celebrate this day by—you guessed it—making s’mores!

People also have set records with them. According to the Guinness Book of World Records, the record for the most people making s’mores at the same time is 453. The Girl Scouts Heart of Central California accomplished this feat on National S’mores Day 2016.

While the classic s’more is delicious, it’s not the only way to make this treat. If you want to get creative, there are plenty of recipes that will help you jazz up this popular snack. One version of the s’more involves another favorite: bacon. As you already know, everything tastes better with bacon.

To make the bacon-infused s’more, you will need:

First, preheat your oven to 400 degrees Fahrenheit. Put a baking rack inside a baking sheet so you can catch excess grease. Next, you will make a bacon weave. Cut the strips of uncooked bacon in half. Place three halves side-by-side. Lift one end of the piece of bacon in the middle and put the fourth piece on top of the other two pieces, but under the middle piece, then set the middle piece on top.

Before baking the bacon, sprinkle it with brown sugar. Put it in the oven for 25 minutes. When it is done cooking, put it on a plate lined with a paper towel.

Roast the marshmallows in your oven or on your stove. If you have a fire pit, it might be fun to roast your marshmallows there. Finally, sandwich the chocolate and marshmallows between your bacon.

Sometimes, one s’mores isn’t enough. If you’re making dessert for a larger number of guests, the s’mores pan might be a better option.

Here’s a creative way to make s’mores: use Oreos. Everyone loves Oreos, right? All you need is peanut butter, chocolate, marshmallows, and graham crackers.

Spread peanut butter on each side of the Oreo cookie. Put it onto one half of the graham crackers. Place the chocolate on top. Roast the marshmallows until they are golden brown. Then, place it on top of the chocolate and cover it with the remaining graham cracker. Easy peasy.

Caramel S’Mores: It’s Not Just About The Chocolate

Chocolate isn’t the only ingredient that can make s’mores great. Try adding some caramel to enhance the flavor. Make them the usual way, but drizzle some caramel on the chocolate before making the sandwich. However, there are other sweet additions you can make to this treat.

If you don’t feel like using caramel, try something different. White chocolate, vanilla or even fruity syrups can make a huge difference. That is where you can get more imaginative.

Everyone loves cake, right? There are tons of different types of cakes you can make for certain events, but a s’mores cake is a unique way to delight your guests. Making this version is a bit more complex than simply making smores, but it’s well worth it.

First, you will make the ganache. Heat the chocolate, salt, and heavy cream in a bowl set in a saucepan with simmering water. Make sure the bowl does not make contact with the water. Stir the mixture occasionally until the chocolate has melted. Then, stir in the vanilla. Take the bowl out of the pan and let it sit for 1 hour.

While your ganache is cooling, you can start making the filling. First, preheat your oven to 350 degrees Fahrenheit. Grind the graham crackers into crumbs, and melt the butter. Put both into a bowl with the salt. Spread the mixture on a baking sheet and bake for 8 to 10 minutes. Remove the pan and allow it to cool.

Cut the cake horizontally in half to form two layers. Put on half on the platter and spread your marshmallow cream on top. Make sure you stop spreading about one inch from the edge of the cake.

Sprinkle one-third of your graham cracker mix over the cream. You can make the cake with only two layers, or you can add layers by repeating this process.

Who doesn’t love a sweet muffin for breakfast in the morning? Instead of relying on the same old blueberry or bran flavors, try making it with a s’more-based recipe. S’more muffins are not only delicious; they are easy to make.

Preheat your oven to 350 degrees Fahrenheit. Break down your graham crackers into crumbs. Mix these crumbs with sugar and baking powder in a bowl. Add eggs, honey and milk. Stir the mixture until it is moistened. Next, add ½ cup of chopped chocolate.

Pour your batter into a greased muffin pan. Fill each cup to ⅔ full. Mix the remaining marshmallows, graham crumbs, and chopped chocolate and sprinkle it over the batter while it is in the pan. Push it lightly into the muffin batter. Bake the muffins for 22 minutes, and then allow them to cool.

If you’re not in the mood for muffins, perhaps you would prefer cupcakes. This is a great treat,  especially for birthday parties. Like the other recipes, they are easy to make.

Preheat your oven to 350 degrees Fahrenheit. Line two 12-cup muffin tins with liners. Break down your graham crackers into crumbs. Put them into a bowl with your butter and sugar. Place one tablespoon of the mixture into each liner to make the crust. Next, you will make the cake mix using the instructions on the box.

While the cupcakes are baking, start making the ganache. Put chocolate chips in a heatproof bowl. Heat your heavy cream in a saucepan over medium heat. After it starts to boil, turn off the heat. Then, pour it into the bowl with the chocolate chips and whisk the mixture until it is smooth.

When the cupcakes are almost done, take them out and apply a tablespoon of ganache onto each cupcake. Top each one with a marshmallow.

Get Your S’Mores On

There is more than one way to make s’mores. This famous treat allows you nearly limitless possibilities when it comes to being creative with your baking. The recipes in this article will help you find new ways to make s’more-based treats.