Activewear is go-to wear, even for those who normally don’t work up a sweat or range far beyond the suburbs. One company, BUFF, has created a multifunctional headwear piece that has created fans and puzzled on-lookers. Many people don’t know how to wear a BUFF or even why they’re so popular.

Sports have had a way of influencing fashion. And a few top names in the outdoor gear industry have set quite a few trends in the last couple of decades. The first official BUFF was developed in the early 1990s by Joan Rojas as a way to protect his head and neck on long bike treks.

What is a BUFF

Although “BUFF” is the name of a company, it’s become a catch-all term for a loose knitted sleeve you wear on your head. The design, basically a tube, lets you configure it in a number of ways to protect yourself from the elements.

BUFF has expanded their original design into a number of types to include extra protection from cold weather, UV rays, and overheating. And you can even find them in licensed patterns, including a National Parks line that depicts your favorite mountain’s majesty.

Why Wear a BUFF

As well as being pretty stylish, a buff is easy to wear during outdoor activities and sports. That’s because the tube design makes it easy to adjust to outdoor conditions. For example, you might choose to wear a UV-protective buff to protect your head in the sun. At nightfall, if you’re still on the move, all you need to do is slip it down around your neck to ward off the impending cold.

Manufacturers make buffs from stretchable material like Spandex or Lycra. The light fabric provides a lot of warmth for its weight. And it doesn’t take up much room or weigh heavily in your pack.

Most importantly, because it’s versatile and you can wear it in so many ways, you won’t have to pack extra gear.

The original BUFF company has taken this slouchy-looking headgear to the next level. They’ve worked with new textile technologies to make its product integral to the sporting goods market. Consider some of these lines:

Reflective BUFFs feature a 360º high-visual reflective pattern and made from 100 percent recycled materials.

How to Wear a Buff

Now that you know why so many outdoor buffs love their BUFF, you may want to know how to wear a buff. Let’s take a look at some popular configurations.

Whether you’re trying to avoid a chill or a sunburn, your BUFF will come in handy to protect your neck. Next time you have a sore throat, wrap up tight and take some hot tea with lemon and honey. Or just look like the fashionista master you are. 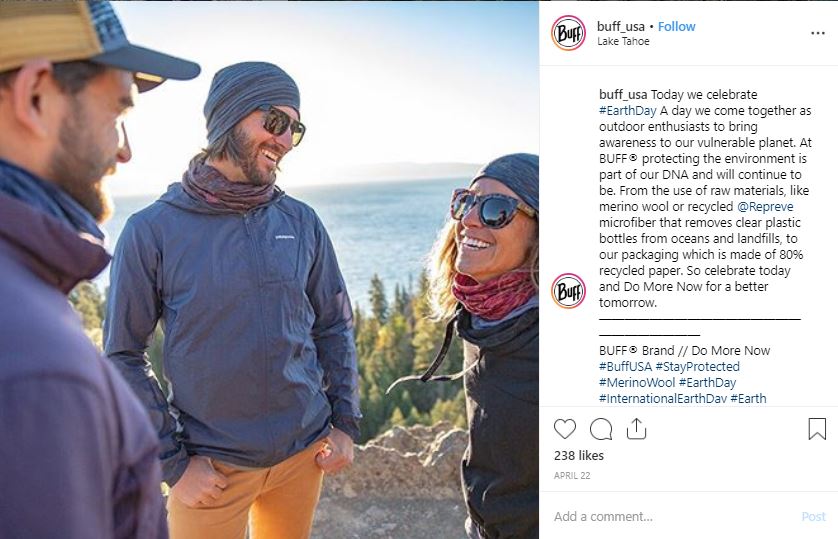 Keep your head warm, especially those ears, when you’re trekking through winter woods. You can lose a lot of heat from your head, causing you to feel the chill much sooner than you’d probably like. Bring your buff down around your neck, then pull the front up and over to cover your head. 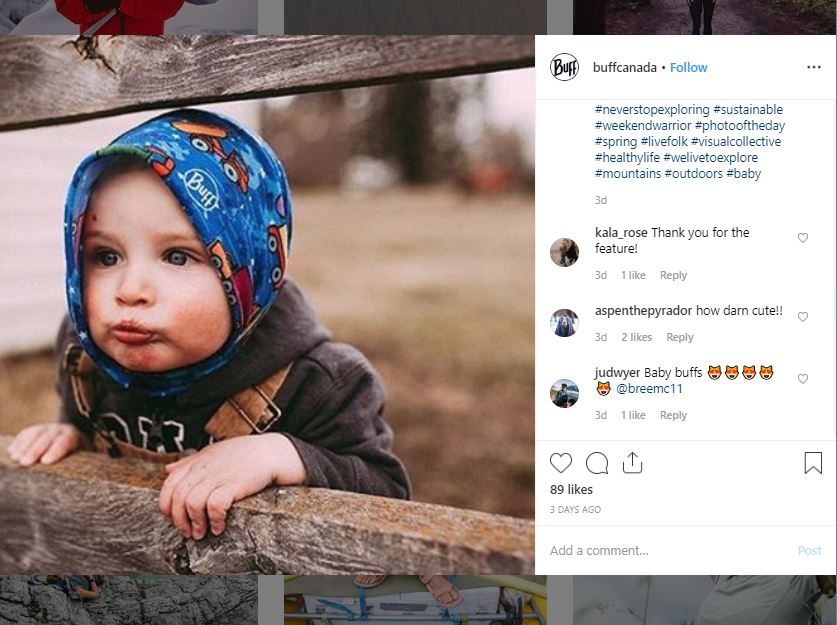 Long hair can get in your way when you’re setting up camp. Hot days can also mean sweat in your eyes, which can make even the most trivial activity a challenge.

Pull your buff down around your neck, then bunch it into a tight band. Pull the band up over your face and head until it grips your hair. This should help keep the hair out of your eyes. 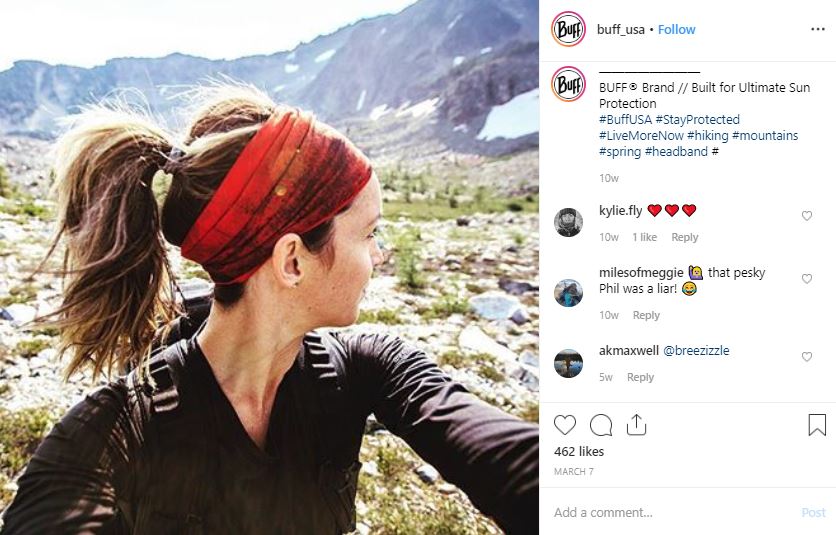 Breathe easier outdoors by using your buff as a face mask. Protect yourself from biting cold, dust storms, and smog with your buff. After settling it comfortably around your neck, pull the front up to cover your nose and mouth. 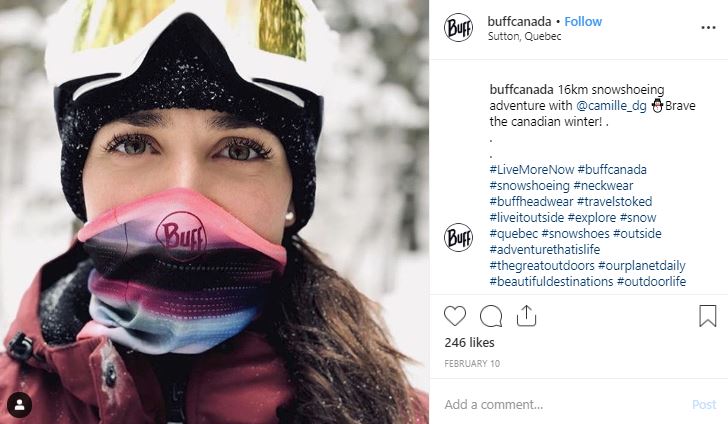 Keep your hair under control as well as protecting it from the baking sun. Pull your buff over your head and smooth it down over the back of your head. 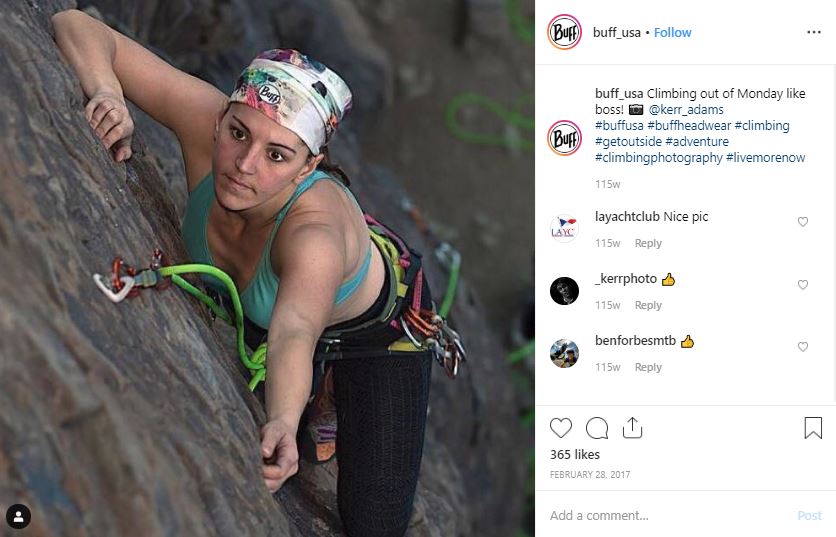 Feeling a bit like a buccaneer? After arranging your buff do-rag style, tie a knot at the back to provide better airflow to your neck to help you stay cool. 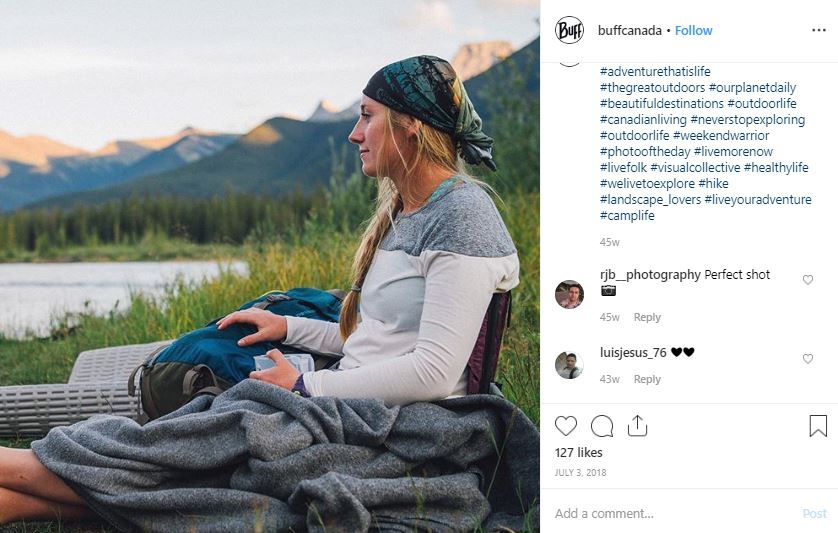 When you’re on the slopes, pull your buff up over the back of your head and let it cradle your ears to keep warm. You can also wear it as a hood on hot days for better sun protection.

The balaclava buff gives you complete protection while camping and for skiing. It covers your face, neck, and head while still allowing you to breathe freely through the light cloth. Pull your buff down around your neck. Then pull the back of it over your head. Allow it to cradle your ears, neck, and nose for full coverage. 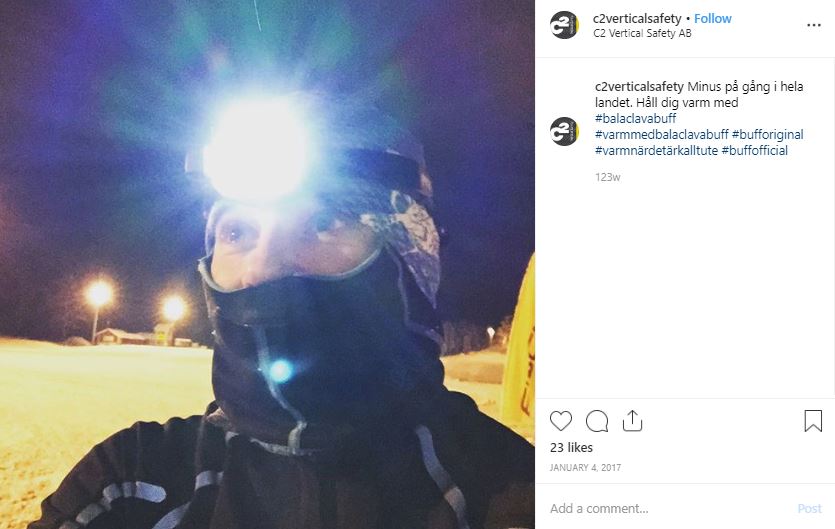 A cute take on the buff do-rag, perfect for long hair. Place your buff over your hair and tie it in the back with an opening for your ponytail. BUFF calls this the Foulard style.

You can also use your buff as a cap. Turn your buff inside out and twist the tube in the middle. Then pull the right side down over the inside to create the cap.

If you’re working outside and sweat is making you lose your grip, try wrapping your buff around your wrist. Similar to bandanas, skateboarders, dancers, and gymnasts wear buff wristbands to improve their grip as well as a fashion statement.

Yes, you can get a BUFF for Fido, too. While there may not appear to be any immediate practical purpose, think again. Along with helping you easily find and identify the family pet, the dog BUFF has the same benefits as those made for humans. This includes the Insect Shield®  to protect your pet from fleas and ticks.

The dog BUFF also comes in reflective models. This means that if your pooch wanders away from your campsite, he’ll be better visible by drivers. That helps keep him safer from run-ins with autos.

How to Wear a Buff: Tutorial Video

There are so many cool ways to use this handy headgear that the manufacturer produces a video showing how to wear a buff.

Other Ways to Use a Buff

Speaking of how to wear a buff, you’d be surprised at the different ways you can use one when you’re out and about. A buff basically fills in as a hat, headband, scarf, and facemask. And we’re willing to bet that people have probably even used it as a splint in a field dressing.

In fact, we aren’t the first BUFF fans to think of this.

Advantages and Disadvantages of Wearing a Buff

Let us go through the various pros and cons associated with having a scarf or a buff when camping outdoors.

Time to Wrap Up

Fashions come and go, but as far as practicality goes, a BUFF is pretty handy. Kids like them, because they’re easy to put on and hard to lose.

BUFFs are particularly handy for winter camping. Many people forget how much more important sun protection is in the winter. That chill in the air means people are less likely to protect their skin from the sun. A BUFF conveniently provides both warmth and sun protection in one stylish package.