Coleman Instant Tent 6 Review: How Easy Is It To Set Up?

No other vacation has the potential to create life-long memories like a family camping trip. The chance to explore beautiful wilderness areas, see wild animals in their natural habitat and share once-in-a-lifetime experiences make outdoor adventure the perfect family bonding opportunity. Of course, camping also has the potential to create truly unfortunate memories. Getting lost on the trail, devoured by mosquitos or soaked by a midnight rainstorm when your tent fails are the types of family bonding experiences you probably want to avoid.

No other vacation has the potential to create life-long memories like a family camping trip. The chance to explore beautiful wilderness areas, see wild animals in their natural habitat and share once-in-a-lifetime experiences make outdoor adventure the perfect family bonding opportunity. Of course, camping also has the potential to create truly unfortunate memories. Getting lost on the trail, devoured by mosquitos or soaked by a midnight rainstorm when your tent fails are the types of family bonding experiences you probably want to avoid. 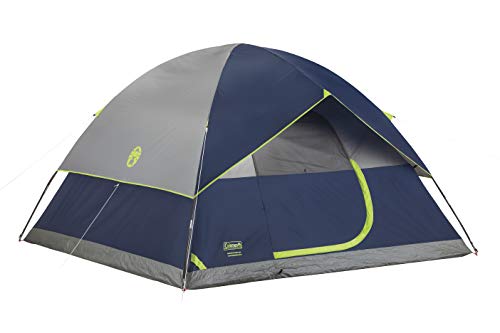 The best way to make sure your family camping adventure creates more good memories than bad is to make sure you’re prepared and well-equipped. Besides comfortable hiking shoes, the most important pieces of camping gear for an enjoyable trip are a reliable camping stove and fuel, warm sleeping bags and pads, and a good tent. These are the things that ensure you and your family stay fed, warm and dry, which is crucial for making sure everyone remains a happy camper. If you’re looking to buy your first tent or are just ready to replace an old one, we’ve got you covered.

To help you in your search for the perfect family tent, we have a comprehensive review of the Coleman Instant Tent 6. We’ll take a look at its main features, how easy it is to set up and how it performs in foul weather. We’ll also give you a breakdown of the pricing to see how it compares to the competition.  By the time you’re finished reading our review, you‘ll have a pretty good idea whether this is the right tent for your family and your budget. What Is the Coleman Instant Tent 6?

The Coleman Instant Tent series is Coleman’s family of pop-up, free-standing tents, which can be erected in under two minutes thanks to preassembled poles. The Instant Tent 6 is designed to sleep six people, which means it’s spacious enough to fit most families comfortably. Made from Coleman’s ultra-durable trademarked Polyguard 2X fabric, it’s constructed using a patented WeatherTec system, including welded and inverted seams, to keep the cold and rain out. It’s a three-season tent so it will serve you well in the spring, summer and autumn months.

Coleman has made some updates to the 2018 model, probably in response to complaints that the older generation Instant Tent 6 leaked in heavy downpours. The first generation Instant Tent 6 was also criticized for not being very breathable and only having vents on the top of the tent, which had to be closed when it rained. The updated model now comes with a rain fly and has an added ground vent for better breathability during wet weather. It’s also a bit more expensive, has two fewer inches of headspace and reflective guy lines to make them more visible after dark, so you’re less likely to trip over them. The Instant Tent 6 has a lot of great features to make your camping trip easy and comfortable. Here are some of the highlights.

While there are some great features on this tent, there are a few things to be aware of before you take it camping. Here are the most important caveats. How Easy Is It to Set Up?

This tent lives up to its name, with set-up being almost instant. The very first time you assemble your Coleman Instant Tent 6, it might take you as long as two minutes, but most regular users can get it up in around one, even working alone in the dark. The pre-assembled poles telescope open and lock into place automatically. When you’re ready to break-down camp, click the locks open and the poles slide back into each other. You’ll need a few extra minutes to stake down the tent and rain fly if it’s windy or wet, but even that’s easier since you don’t need to rely on the guy lines to hold your poles up.

The simple, quick set-up of this tent is its main selling point. It means you get to spend more time having fun with the family rather than struggling to get your camp set up. That extra fifteen minutes might not seem like a big deal from the comfort of your couch, but when it’s raining or dark, or there’s just a beautiful lake you can’t wait to jump into, you’ll really appreciate the ease of the Instant Tent 6. Does It Hold Up in Bad Weather?

The improvements made to the 2018 model have made the Instant Tent 6 a safer bet in inclement weather. It can easily withstand the usual spring and summer storms most campers are likely to encounter. It is, however, critical that you get the rain fly set up properly to prevent leaks. When you pitch it, make sure the fly is pulled taut so the rain can run off it. It’s also essential to make sure the fly doesn’t rest against the main body of your tent. Wherever the rain fly touches the tent body, moisture can seep through and drip inside the tent, making for a very soggy night of sleep.

If you’re anticipating heavy winds and torrential downpour, you may want to opt for a different tent or reschedule your trip altogether. While most families can spend a few hours happily playing cards or board games inside a tent of this size, a whole weekend in close quarters may leave everyone feeling cramped, cranky and clammy.

Is the Coleman Instant Tent 6 a Good Value?

If you’re on a bit of a budget, the Instant Tent 6 from Coleman is one of the best tents for your money. It’s spacious, ridiculously simple to erect and keeps you dry in stormy weather. Although the updated 2018 model is around $80 more expensive than the earlier generation Instant Tent 6, it’s still a great deal at around $260. That price includes the tent body, the rain fly, stakes and carrying case. To get a tent that’s even a little bit better than this one, you’re looking at paying nearly twice as much. That must be why so many camping websites have ranked the Instant Tent 6 as their top pick for good value.

What Are People Saying?

Reviews by people who’ve actually camped with the Instant Tent 6 are overwhelmingly positive. Nearly everyone is impressed by how fast and easy the set-up is. Many users also report the tent holding up incredibly well in bad weather, even with gusting winds, snow and ice. The most admired features include the generous headspace and excellent ventilation in hot weather, thanks in large part to the four mesh windows. 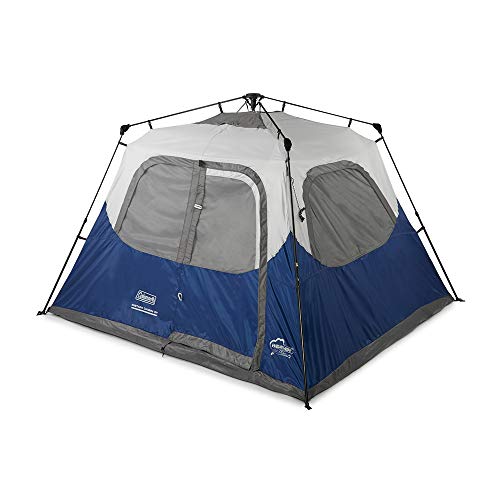 While the response to this tent by real campers has been mostly good, there are a few design flaws that come up again and again. The most common complaint is that the rain fly doesn’t provide any kind of canopy over the door, so when you go in and out of the tent when it’s raining, the water slides right down the fly and into the tent entryway. It’s also not uncommon for the door zipper to get caught on the cover flap, so users suggest being careful when you zip and unzip the door. They also mention that getting the tent rolled up and re-packed into the carry bag can be a bit of a challenge.

If you read user reviews of the Instant Tent 6, you may notice reviewers commenting about moisture on the inside of the tent walls in the morning but this isn’t a design flaw. Unless you’re camping someplace really arid, like the desert, you’re likely to find moisture on the inside of any tent in the morning. The moisture is just condensation and not a sign of leaks or other problems. Leave the windows open to air your tent out, and it will be dry by the time you’re ready to pack it up.

How Does It Measure Up Against the Competition?

The entire Coleman Instant Tent series regularly shows up on Best Of lists for family tents. Their overall durability, easy assembly, and affordability make them a great choice over the competition. The Instant Tent 6 is half the price of the only slightly more spacious Nemo Wagontop 6P. If you do a lot of backcountry hikes, the Marmot Limestone 6P is almost 7 pounds lighter and comes with two doors, but again, it will cost you nearly twice as much.

If your family likes to cross-country ski or snowshoe into the wilderness for a weekend of winter camping, you’ll need to invest in something like the 18 pound, all-season, two-room Big Agnes Flying Diamond 6. For basic spring, summer or fall camping trips, however, the Instant Tent 6 has all the features you need for a comfortable night’s sleep in the great outdoors.

If it isn’t already obvious, we think the Instant Tent 6 from Coleman is an ideal tent for most families. If your family includes a full six members, you might want to upgrade to the Coleman Instant Tent 8 to give you a little more breathing room in case you need to bring your gear inside when it rains. Likewise, if you plan on camping during the winter months or doing a lot of backcountry hiking, you may want to invest in a lighter, all-weather tent. Otherwise, the Instant Tent 6 offers the best value for families looking for a spacious, weather-proof, well-constructed tent.

If you order directly from Coleman, the Instant Tent 6 goes for $259.99. By providing Coleman with your email address to receive promotional emails from them, you can automatically get 20% off your next purchase. If you order a few low-priced accessories on Clearance for your first order, you can apply your 20% discount to the Instant Tent 6 and get if for around $208. There are also a number of online retailers, like Amazon and Kmart, who routinely offer the Instant Tent 6 at a reduced cost. If you’re really looking to save, you might be able to pick one up used on eBay. 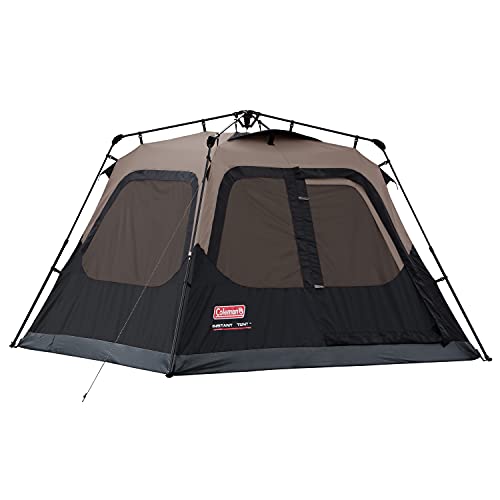 When you bring the whole family camping, you create memories that will last a lifetime. If you want those memories to be good ones, make sure you’re properly outfitted with comfortable hiking shoes and reliable camping gear, including a stove, sleeping bags and pads, and a tent that won’t let you down in foul weather. For most families, a Coleman Instant Tent 6 is a terrific choice for a comfortable and dry night’s sleep in the great outdoors. 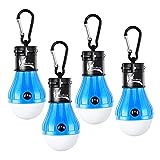 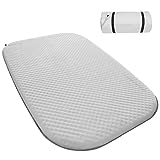