You can have high-quality tents while still shopping for cheap tents. A good tent should fulfill several requirements, without breaking your budget for outdoor fun while shopping.

When you’re outside, a good tent can protect your family from the harsher parts of a camping environment. Cheap tents can still provide reliable shelter.You can find the ability to withstand harsh wind conditions, tough rain, and other elements of nature in cheap tents. That’s why this list compiles several durable, cheap tents that are durable, and provide for camping families and groups of different sizes. 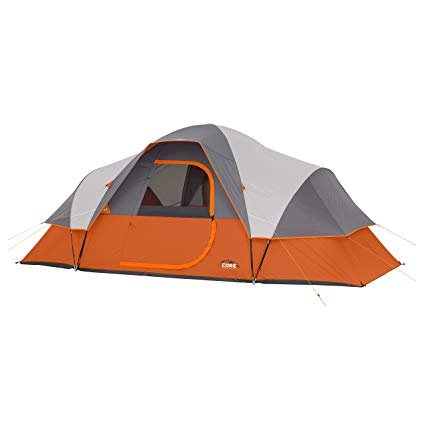 When each product is rated, it will receive a rating using a five-star system. Because each tent on this list is considered a good, cheap tent, a low rating doesn’t mean it is a bad tent. It merely means it offers less protection, space, or other unique features compared to other tents on this list.

Comments from users of each tent will weigh into the final rating. The feedback of those who have tested the tents, and other reviewers, will be considered when the product is rated.

The rating is the final evaluation after all of the factors above have been taken into consideration. Many of the tents will have different dimensions or materials, so a tent on this list may provide for your circumstances better than the others, even if it has a lower score.

The intention is to provide tents of different dimensions so that there is an offering on this list for any camping situation. Each tent should have sufficient variation. There will be only one tent from each brand. If an exception is made and two tents from a single manufacturer are on the list, both were deemed to be distinct enough to warrant consideration.

This list considers the manufacturer’s intentions when offering the final rating. If a product claims it provides excellent shelter from the rain but fails to meet that promise, for example, it will be noted in the review. It will also be considered when the product receives its final rating.

These are the tents that were selected after evaluation of many cheap tents. Each provides some unique advantage and is a sturdy or high-value product compared to other cheap tents. Although the list of tents is in order from highest to lowest rating, each tent should be the best in some way when considering the unique circumstances they were designed for.

The center of the CORE dome tent is a hefty seventy-two inches, but it slopes downward on both sides so that height quickly drops off on either end. The interior has a hanging place for a lantern, pockets in each wall for storing gear, and a hammock for some overhead hanging items.

Although it doesn’t provide any sort of power, there is a hole large enough for an electrical cord. If you camp at a site that has a power station, this can allow you to run appliances inside your tent.

There is only one entrance, which limits the effect strong winds will have on sleeping campers. The rain fly is large enough to extend over the tent’s edges and easily deals with heavy downpours. The stakes are made of fiberglass for extra weight and have shock cord wrapped around the inside to make them difficult to break.

The inside of the tent is large enough to fit two queen size mattresses. On the list of cheap tents, this makes the CORE dome tent the largest in terms of surface area. Although the materials aren’t especially sturdy, the large rain fly and layering of the materials make this tent more durable than you might expect.

The CORE has a similar price point to other cheap tents on our list, despite fitting more campers. Several users said that its tent spikes were flimsy, and might come loose or break in mud and poor ground conditions. This seems to be the main issue holding the CORE dome tent back.

The CORE 9-Person Extended Dome Tent receives a five-star rating. While you may need to purchase stronger tent spikes, this tent excels in nearly every other area. The space, design, and sturdiness make it a good tent for large camping parties or for families who want to camp together.

The ALPS Mountaineering Taurus is a four-person tent that has several features to make it more durable than your average tent. The Taurus is a bit on the high end of cheap tents, but still fits budgets far smaller than those set aside by professional campers and outdoors enthusiasts.

The tent hangs a bit low in the center, only standing fifty-two inches above the ground. While you won’t have much headroom, the lower top means the wind drags less against the tent. This means the tent will remain steadier in heavy winds and is less likely to tip or roll.

The poles are crafted from a fiberglass material. This increases the weight, although they’re easier to damage than steel tent poles. They are also cheaper, which makes them an excellent addition to this tent. The Taurus’ different materials help to lower the cost just enough for us to allow it entry into our list of excellent cheap tents.

The ALPS Mountaineering Taurus doesn’t have sleeved tent poles. You can use pole clips when setting the Taurus up to improve your tent’s stability.

The tent has two doors. Each door has vestibules, which further help to keep out rain, window, or other inclement weather. The tent has a weatherproof coating, and the seams are factory sealed to prevent water from dripping in through any cracks. The tent has a ventilated rain fly over the entire design, which diverts rain from the top of the tent down and away from its surfaces.

The space inside is wide enough that you could fit a queen size bed in the interior. There wouldn’t be space for the rest of your family though, so we don’t recommend it. That space is considerable for a four-person tent but doesn’t drive up the value of the Taurus significantly.

The ALPS Mountaineering Taurus receives a four-star rating. It can withstand winds, rain, and mud better than most cheap tents. The interior changes depending on which model you choose, but tends to be roomy compared to its rivals. The Taurus balances quality with the price well, but it is on the high end of what we consider a cheap tent to be.

Even the largest variant is not significantly more expensive than the smaller tents. The Coleman Sundome 6 has a floor space of one hundred square feet and weighs around sixteen pounds. The interior space is above what you should expect from cheap tents and is its unique feature.

The Coleman Sundome has a mesh window on the back side, which is protected by a rain fly. The rain fly extends over most of the tent but does not cover the corners where the tent poles attach to the ground.

The combination of tent poles and extra long wires that can wrap around the poles multiple times mean the tent itself will be quite secure. The poles aren’t steel or fiberglass though, and thus have less weight driving them into the ground. This makes it easier for heavy weather to pull up the tent poles.

The tent’s material is weatherproofed and thick, so you should experience no dripping or leaks. The weak points of the tent are the mesh window and the corners that aren’t protected by the rain fly. These can allow strong horizontal winds to blow water in in a few extreme circumstances.

The Coleman Sundome receives a three-star rating. It is very cheap, but the quality matches that of most tents designed for harsh weather. The window is a nice addition but can subvert the weatherproofing in some circumstances. If the design considered rain just a bit more, it would be better at holding up under significant duress.

The Kelty Discovery 4 only has about sixty square feet of floor space. The tent can fit four or six campers. It’s just about five feet from the floor to the roof, so many campers will have to duck once inside.

The goal of the Kelty Discovery was conservative design. There is only one door, and the rain fly hangs over it to a significant distance. The material is insulated, so the tent is better at staying warm in the winter and cool during the summer than other cheap tents. Because there is only one entrance, you don’t have to deal with too much wind flow when using the Kelty Discovery.

While it is well insulated, the material isn’t as durable as average tents. To offset this, a large rain fly stretches over the entire tent. It extends several inches beyond the tent in a few directions, so there is no shortage of coverage from heavy precipitation.

The Kelty Discovery uses fiberglass tent poles, so it should remain in place in heavy winds. Overall the tent seems designed to protect you against strong winds and harsh weather changes. It doesn’t stand out against its rivals in clear weather conditions, though.

The Kelty Discovery receives a two-star rating. This tent would receive a higher rating if it were judged purely on its ability to protect campers during inclement weather. It is airtight and insulated, however, which can be an issue on clear, warm days.

If you plan to purchase a tent, you should first consider how large your camping retinue will be. The interior space is one of the largest factors taken into consideration when pricing a tent. If you are camping alone or with one other person, a smaller tent is best.

A tent that’s well ventilated is a necessity in the summer or under clear skies. Most tents use mesh for this and balance that out by protecting mesh areas with a rain fly to protect against downpours. A tent with less mesh and a larger rain fly will be well insulated, but may quickly become too hot during normal camping trips.

A tent that holds up well is determined by one factor above all others; how well the tent spikes remain in place. If you camp in windy areas, such as on a mountain range, a tent whose spikes aren’t firmly planted in the ground will easily blow away.

For that reason, while the CORE received the highest rating on this list, it may not be the best tent for you if you plan to camp in strong winds often. Its size means more surface area will catch the wind to and risk being blown away, and you don’t need that size for fewer than eight people.

You should replace the spikes of the CORE with store-bought tent spikes. A better tent with good ventilation and a smaller surface area may be the Kelty Discovery. Its insulation will serve you well if you plan to camp out of season, or think rain will be a common problem.

If you plan for more ordinary camping experiences, then the Coleman

Sundome may be the best cheap tent for you. It is reasonably well ventilated and comes in smaller sizes,  which can make for a more intimate camping experience. While the best use of the Coleman is for camping in clear weather, the Coleman Sundome can still deal with the forces of nature surprisingly well.

Among the cheap tents reviewed, only the CORE took a need for electrical wiring or other small openings into consideration. If you believe electricity will be a necessity for your camping experience, this provides an edge over its rival cheap tents.