Several features of your average tent may become a problem if you are camping with a dog. Tents can have raised doorways, zippers that make entering and exiting difficult, or other obstacles you don’t think about when camping alone.

Many companies design their tents with pets in mind. This list includes some tents large enough for two adults and a pet dog. If the tent has special features designed to improve your dog’s experience, these will be mentioned as well. 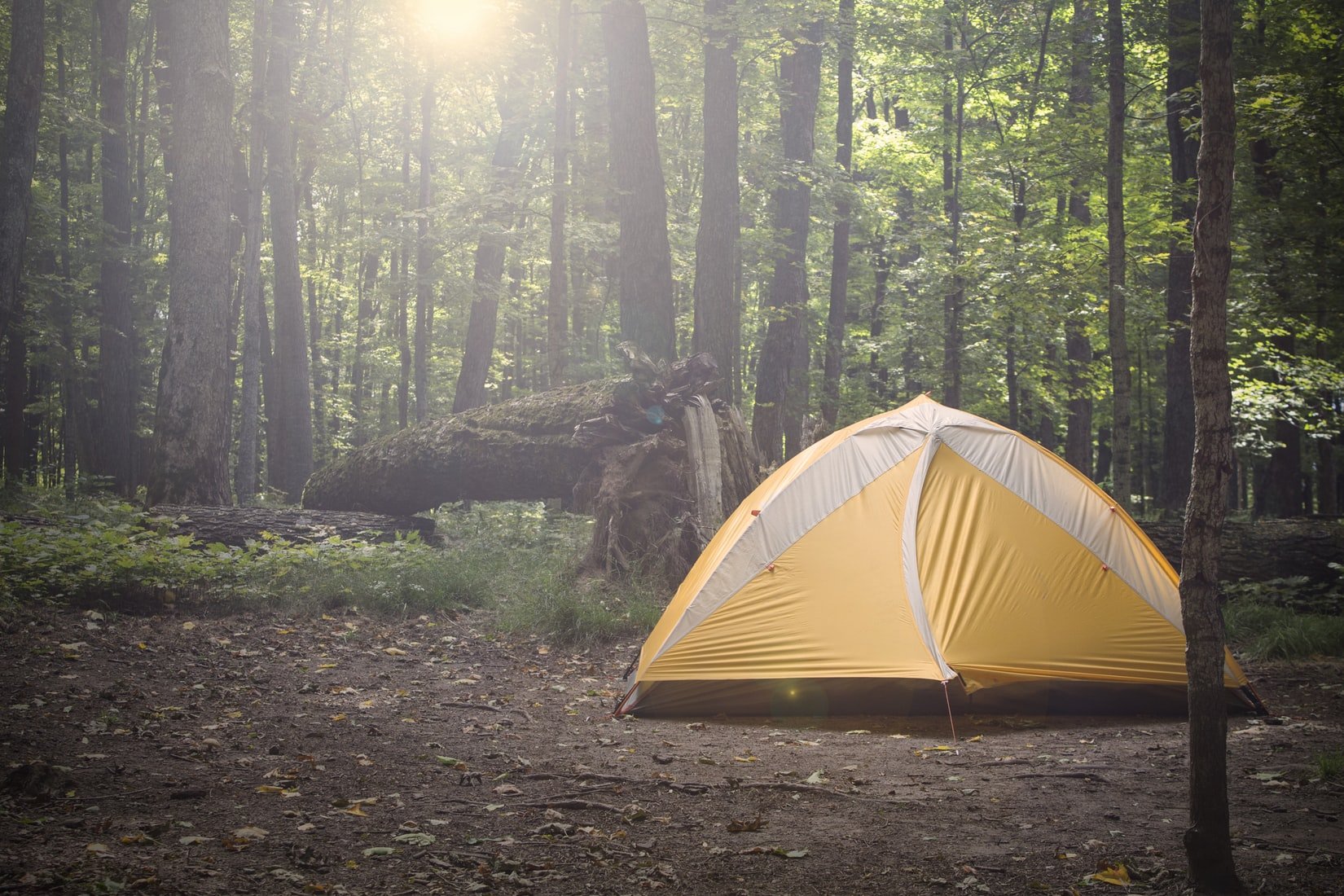 Each tent on this list is rated using a five-star system. The rating will include feedback from users and the impressions of testers. Other reviews will be taken into consideration when giving the final rating.

The intention of the manufacturer will be taken into consideration when each tent is rated. If the tent manufacturer claims to have extra square footage, but only meets the standard dimension, it will be noted.

Each candidate for the best tent for 2 adults and a dog will be judged based on their unique features. Every offering on this list should be unique in some regard when compared to its rivals.

Every product on this list has the potential to be the best tent for 2 adults and a dog. A low rating won’t mean that it is a bad tent, but that it has fewer unique features than other tents on this list.

Top 4 Best Tents For Two Adults And A Dog

Every tent on this list should be considered a candidate to be the best tent for 2 adults and a dog. Depending on the size of your dog, allergies to tent material, or other individual needs the tent that is right for you may not be the highest rated tent on this list.

To help make an informed decision, each listing includes a description of the product. Each product listing will mention several key features that either users or the producers feel help to define the product. 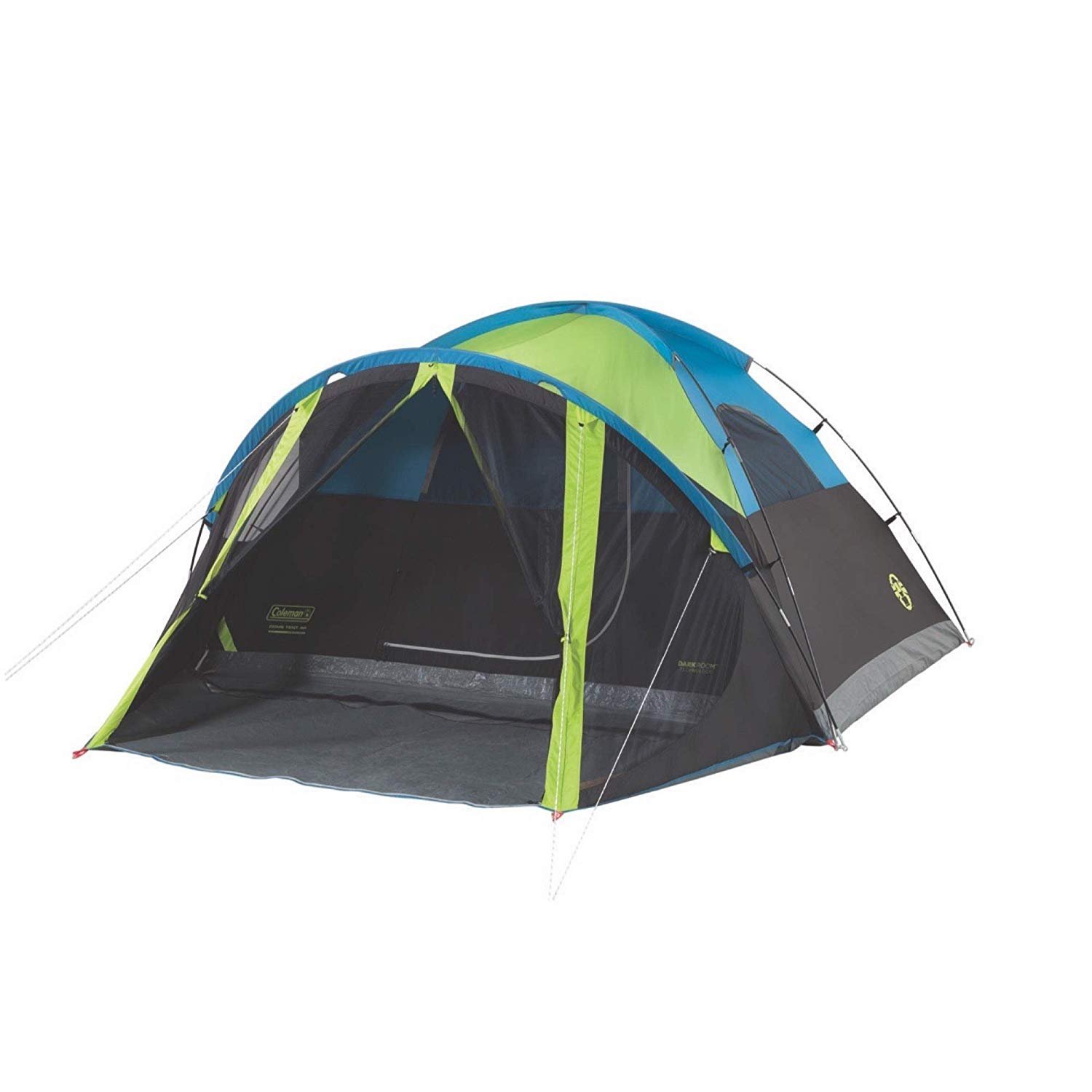 The Coleman Carlsbad is designed for four occupants. If you have two dogs, or if you want a little extra space for two adults and one dog, the extra room can be a boon. The benefit is that the Carlsbad’s design makes campers who want to bring pets with them a focal point.

The Carlsbad is the best tent for two adults and a dog who want to sleep in. A layer of black material along the outside of the tent blocks nearly all sunlight.The inside of the tent will stay as dark as night time, even under noon sunlight.

The design of the vestibules allows them to drain when there is rain or mud. This keeps the main room of the tent dry when working together with the rain fly. Any luggage left in the vestibule may get wet or filthy due to the way the tent drains water away, however.

The Coleman Carlsbad receives a five-star rating. It is well designed and keeps the interior temperature even in different environments. The tent is spacious enough for two adults and a dog, and the rain fly and vestibules keep out even harsh rain. The Carlsbad takes several of the biggest camping problems into consideration and has a unique feature to deal with all of them. 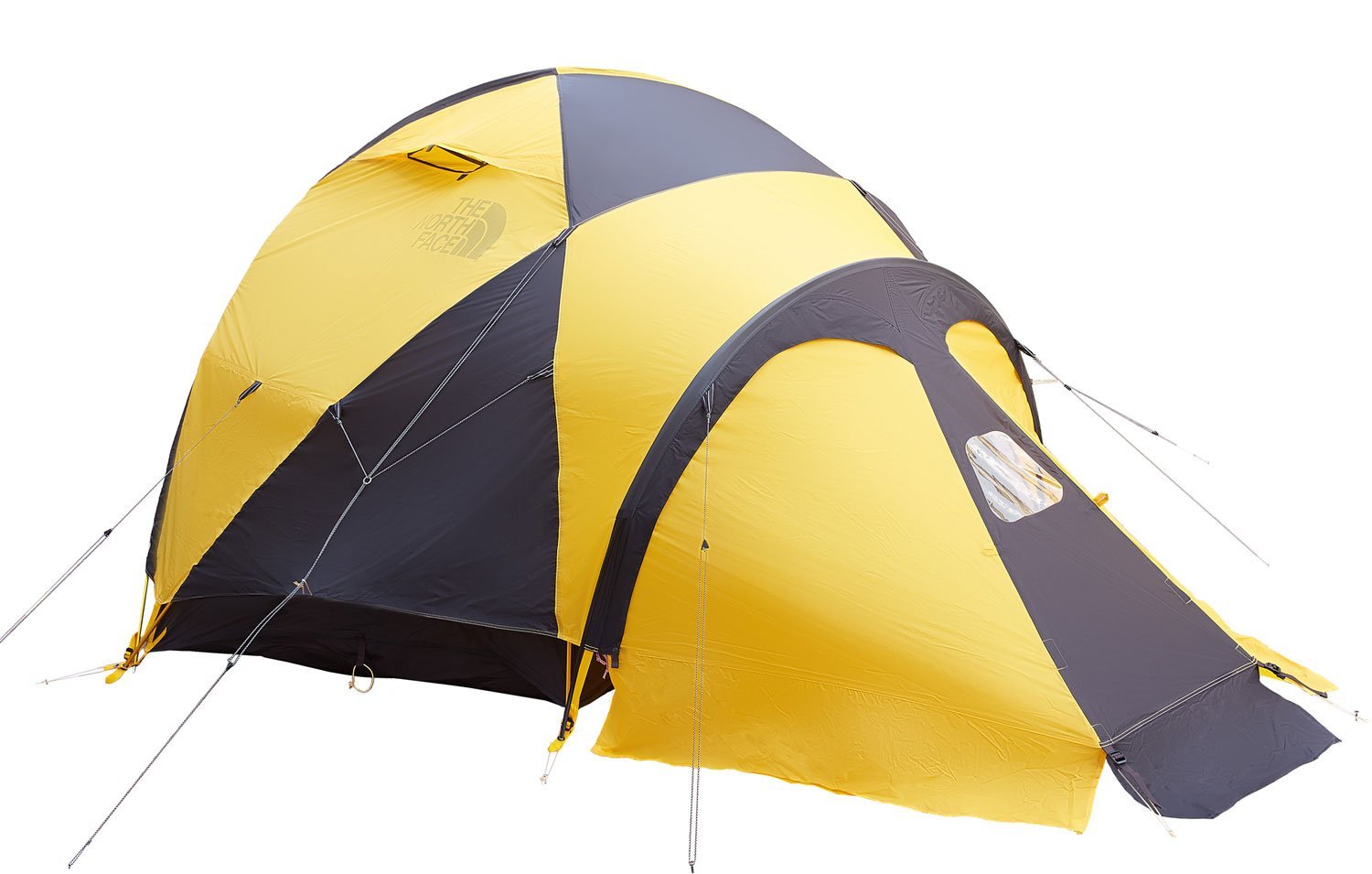 The North Face VE 25 is designed to be exactly the right size for a couple and a dog. This tent is made with thick material. The tent is considered the most durable item on this list. It is considerably well insulated and can keep you warm in winter with ease.

The insulation of the tent does mean it won’t work as well during the summer as it will during the other three seasons. Although its weatherproofing will keep out heavy rain with ease, it can get humid on a clear day faster than several of its competitors.

The vestibule helps to keep mud and dirt from the inside of your tent. The fact that the North Face’s vestibule doesn’t have a flooring material is unique. You may not want to let your dog sleep in the vestibule, or you could put down a mat for them. There is enough room in the main tent to fit them with ease.

The North Face Ve is a bit heavy to carry. Its thick materials can make it more demanding when you carry it around compared to its rivals. The most important detail to consider when purchasing a North Face VE is what conditions you think you’ll be camping in.

The North Face VE 25 Tent receives a four-star rating. This tent is crafted with heavy winds and inclement weather in mind, and it beats its rivals handily in these conditions. The thick insulation, and the strange decision not to provide flooring for the vestibule mean it has a few key flaws to be aware of though. 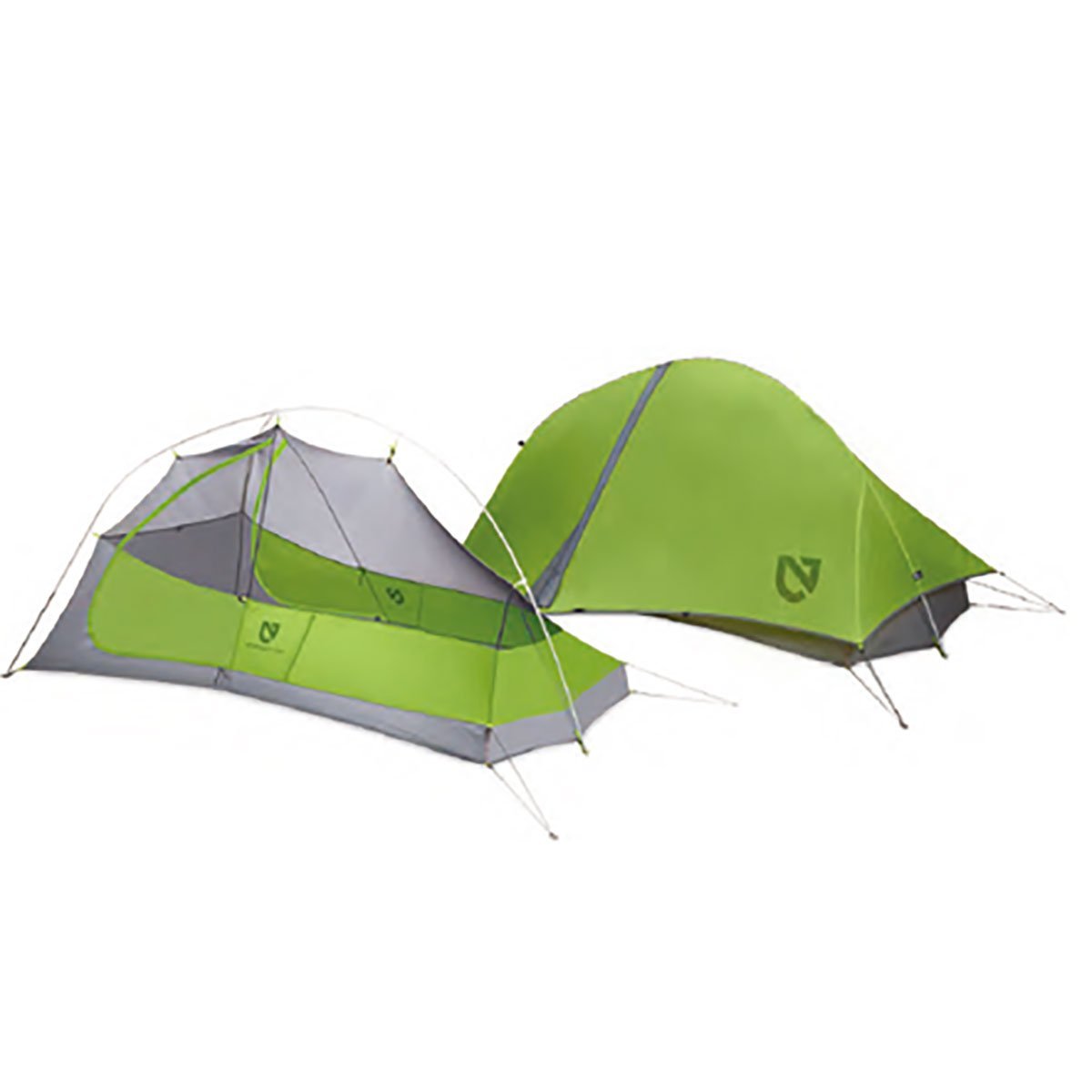 This tent comes in two models. The larger model was designed to fit three people, or a couple and their pet. The nylon material that makes up the floor can tear under your dog’s claws, so you may want to buy a mat to lay down when camping.

The tent is made out of Ripstop Nylon, while the rain fly over it is made out of silicon and nylon. Altogether the weight of the tent remains under four pounds, so it is easy to carry.

The floor space of the Nemo Dagger three-person variant is forty-four square feet. The tent is only forty-two inches high, so you will need to duck when inside. There’s also room to hang lights and other fixtures from the top of the tent.

The tent has several mesh areas to allow airflow. It also has two vestibules so that you can enter or exit from either side. This allows your tent to remain cool in the summer, but if it rains you may need to pull the rain fly down a bit tighter over the tent.

The Nemo Dagger Ultralight tent receives a three-star rating. The tent is easy to set down and is incredibly light. The low weight is offset by a floor that dogs can easily tear with their nails, though. The mesh can allow for some problems with rain in heavy storms, and the ceiling is a bit low. 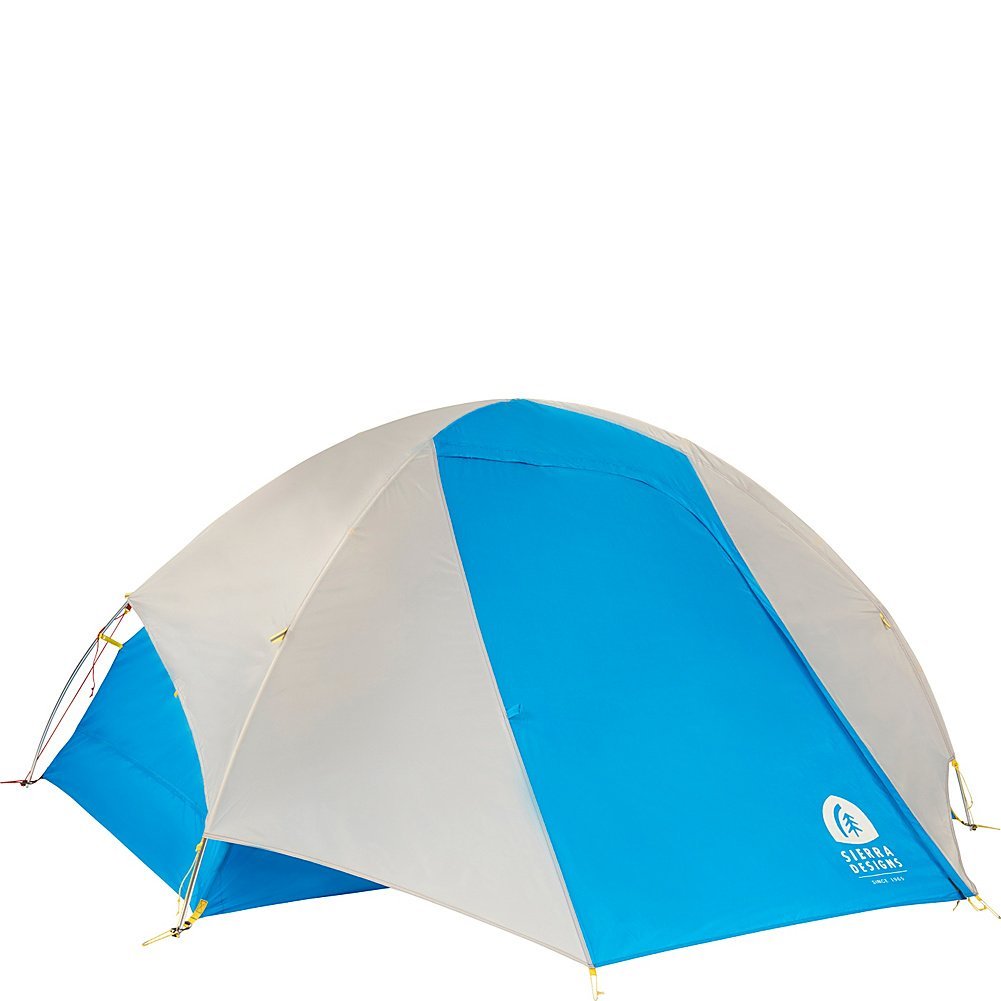 The Sierra Summer Moon weighs roughly four pounds and has a forty-eight-foot square space inside. Two six foot tall campers said that it had a tall enough interior to suit their needs without making them uncomfortable.

There are two vestibules, in case you want to set muddy gear outside of the main area of the tent. A large rain fly covers the entire tent, protecting the main tent and the vestibules to some degree.

The Sierra Summer Moon is an excellent tent for two adults and a dog, but it is just big enough to fit a fourth guest if it’s required. One user said that they used the tent with a guest and two dogs, and never felt especially cramped.

The one drawback of the Sierra Summer Moon is that the door is zipper sealed. In heavy rain, some water may trickle through the zipper areas. Although the rain fly will catch much of this, if it is especially windy you may find yourself facing this problem.

The Sierra Summer Moon receives a two-star rating. It has plenty of headroom inside the tent, and it has average floor space. The leaking around the zipper area and the vestibule can be an issue though if you camp in heavy rain. 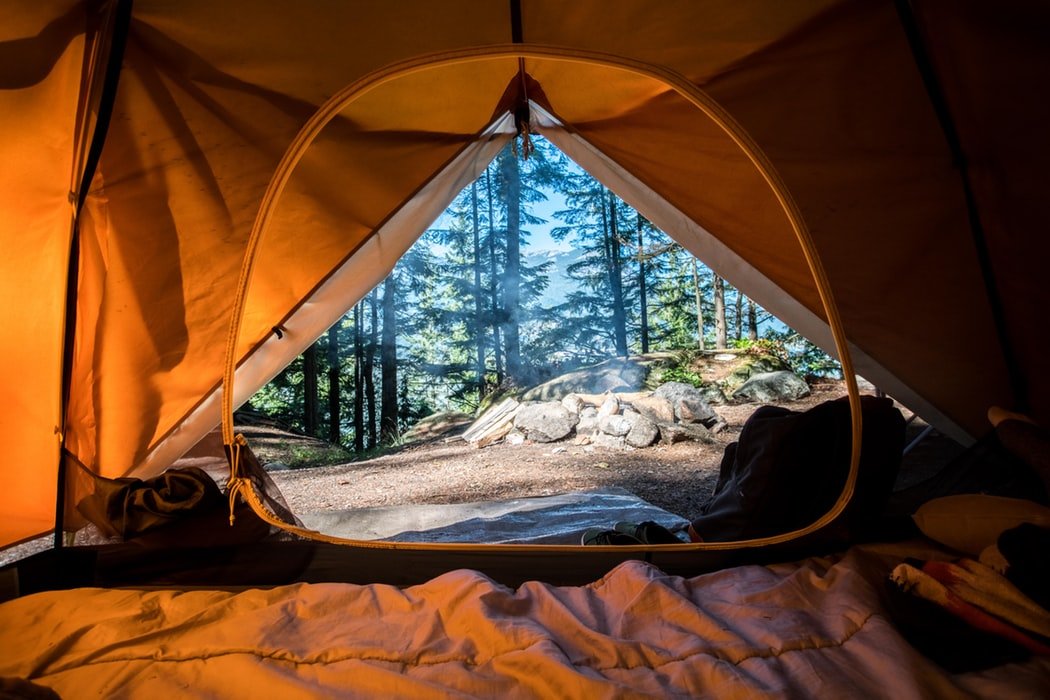 If you want to camp with a dog, the durability of your tent will be an issue. The size of the tent is the second factor that becomes more important, as dogs may want to crawl around inside.

A tent with poor floorings, such as Nemo Dagger, may be destroyed if your dog isn’t careful. This can cost you a lot of money, so you may want to consider buying a mat to put down just in case. Tents with thick material, like the North Face, are much more pet-friendly in that regard.

The other issue is space. None of the tents on this list were especially small. The extra headroom of the Sierra Summer Moon may make it the friendliest tent for tall, human occupants. If you’re worried about how much space there is when everyone is laying down, the Carlsbad has considerable square footage.

Finally, remember tents that are well insulated and deal with bad weather well may not be the right tents for clear weather camping. Several testers commented that the North Face was the best tent, while others gave harsh reviews.

The finding was that the biggest difference lay between users who went camping during a clear summer day and users who would camp in poor weather.  Campers who used it in the summer found the tent to be very hot.