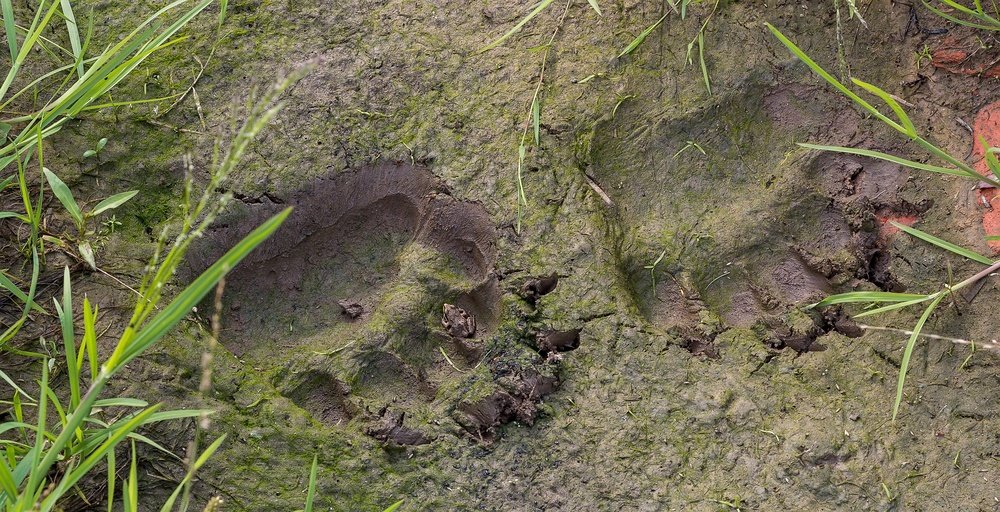 One of the great things about camping is the chance to immerse yourself in nature. Surrounded by beauty on all sides, being outdoors in the middle of the natural world is one of life’s great pleasures.

Whether out on the plains, high up in the mountains, or somewhere in between, it also means that you are sharing space with some of the earth’s most magnificent animals. You may not always see them in the flesh, or fur, as is often the case, but there is another way to observe the animals around you.

If you know where to look and what to look for, there’s an excellent chance you’ll see where many of these four-legged creatures came from, and where they’re going.  A single trail can tell a fascinating story.

Identifying animal tracks has been around for centuries. Native Americans needed to understand animal footprints to hunt for game and steer clear of danger.

Today, the practice is less life and death and more to experience and better understand animal patterns and movement. Although, being able to identify a few of the tracks below can still help keep you out of harm’s way. So what do you need to track and identify paw prints? Very little actually.

The first thing to pack is a tracking sheet specific to where you plan to travel. If heading to a national or state park, it’s highly likely you can find a handy printout online of what animals to expect and ways to identify them.

We’ve included two examples below, one from the National Park Service and one from Texas Parks, to give you an idea of the type of information that is available.

Also, a small travel tape measure is helpful for measuring the size of a print, which in turn helps you identify the type of the animal. Now that you’ve got the tools, how do you determine which animals belong to which tracks?

Tracking animals has been refined down to an exact science. But for the novice, just knowing a couple of basics will be more than enough to satisfy your understanding of the paw prints left behind. Shape and gait are perhaps the two most straightforward ways to start identifying animal tracks.

The Shape of the Foot

Did you know the cat family has a paw print that is more rounded than that of canines? It’s true. Recognizing the basic shapes of the impression can quickly narrow down the animal foot you’re observing.

Gait patterns are essential in determining how an animal walks, which is another method in deducing the animal you’re tracking. Gaits tend to fall into four categories: pacer, diagonal walker, bounder, and galloper. Knowing how a creature moves will tell you more about its personality than almost any other trait.

With that basic understanding, let’s get to know a few of the more common animals you’ll encounter when visiting a nature preserve or park.

Let’s start with one of the most recognizable and arguably most popular animals in the US. Identifying a bear paw is easy and can potentially keep you out of harm’s way should you spot a track before the bear spots you.

Bears make large tracks. The front paws can average around four by four inches with the backs measuring four inches wide by seven inches long. The back foot can also resemble a human foot in the area of the heel if the bear leaves a clear impression.

Reclusive, the bobcat is a master stalker with a precise, diagonal walking pattern that can mask the fact it has four legs. Bobcat tracks are approximately two by two inches with the front feet a bit bigger than the back paws.

Hailing from the canine family, coyote tracks take on the oval shape of a dog but are often wider than that of their domesticated cousins. Another difference is the trail a coyote takes is much straighter than your average dog, which likes to wander.

Like the bobcat, paws on a coyote are often larger in front than the back and measure an inch or two more between each pair of feet.

As a game animal, deer tracks are perhaps the most well-known in the United States. Their distinctive hooves also make it easier to tell them apart from other animals.

You can usually find their heart-shaped feet pattern with other imprints nearby signaling more deer in the vicinity. Tracks can range anywhere from two to five inches in length with meandering trails left behind.

Prevalent throughout the US, opossums are the only marsupials native to our continent. Curious little creatures, opossums are most active at night when they head out in search of food.

Their front feet are typically an inch shorter than the rears, which measure about three inches in length and also have a unique thumb.

Another animal usually more active at night, the raccoon is a diagonal walker that can spend extended amounts time of tracking around for food.

Though it shares some traits with the opossum, raccoon tracks display an interesting shape, with its five toes splayed out similarly to that of a human hand. Front feet are smaller than the rear, measuring from two to three inches, whereas the backs are three to four inches long.

For our final animal, we’ll look at what may be one of the most elusive prints to capture, the squirrel. Thankfully, these gallopers are not hard to spot as they bound from tree to ground to tree.

Rarely do they leave easily observed tracks. Prints in mud or soft earth are usually your best bet, and even then, due to their minimal weight, it may be negligible. If you can spot one though, you’ll notice four toes up front and five in the back much like other members of the rodent family.

Animal Tracks in the Snow

When winter arrives, identifying animal tracks will give you a much different perspective following your favorite animals. Especially when observing tracks made in the snow.

Snowfall leaves behind a pristine canvas on which to track and identify winter wildlife. Also, snow can allow a type of measurement that it sometimes hard to come by during warmer months, depth.

Heavier animals will leave deeper impressions, lighter ones the opposite. In some cases, the same animal can make what appears to be opposing tracks. Take for example a bird landing then walking in snowy ground. The original print will reflect the impact of the arrival, followed by more delicate steps.

Other examples include the sudden trod of a hare bounding from spot to spot or perhaps prints leading into a heavily disturbed patch of snow where a predator acquired its prey.

Again, it’s helpful to know what to look for and which animals should be present at your destination. The snow offers slight variations that are not present in warmer times of the year.

A Project for the Kids

There is one last thing to mention that can make searching for, and identifying animal tracks a true family endeavor.  Next time you get out for a camping trip or a lengthy trek through lands abundant with wildlife, bring along the tools to make a cast for a permanent keepsake.

A plaster cast to be exact. Made from one of the many tracks you’re sure to find on your adventure. We’ve included a link to a handy little page published by the US Geological Survey that easily details how to cast an animal paw print. It’s a great way to immerse you and your family into nature and take home a handmade souvenir from your trip.

Just remember that once you’ve finished your cast, to clean up all your tools and debris and leave no trace.

Being a fan of the outdoors isn’t just about taking a hike along a local trail or camping at your favorite state or national park. It’s also about learning to understand and identify the sights of what you will experience during your journey.

Nowhere is this more apparent than when studying the animal species with whom we share our natural spaces.  Being able to recognize and distinguish the footsteps our furry friends leave behind is the next best thing to seeing them in person.

When planning a trip to one of our country’s natural wonders, set aside a little extra time to study the animals you may encounter. Bring along some guides to show you the prints you’ll see on your path.

And when you’re there, take a moment to appreciate where the animals have been and where they may be going. In other words, let Mother Nature be your guide.