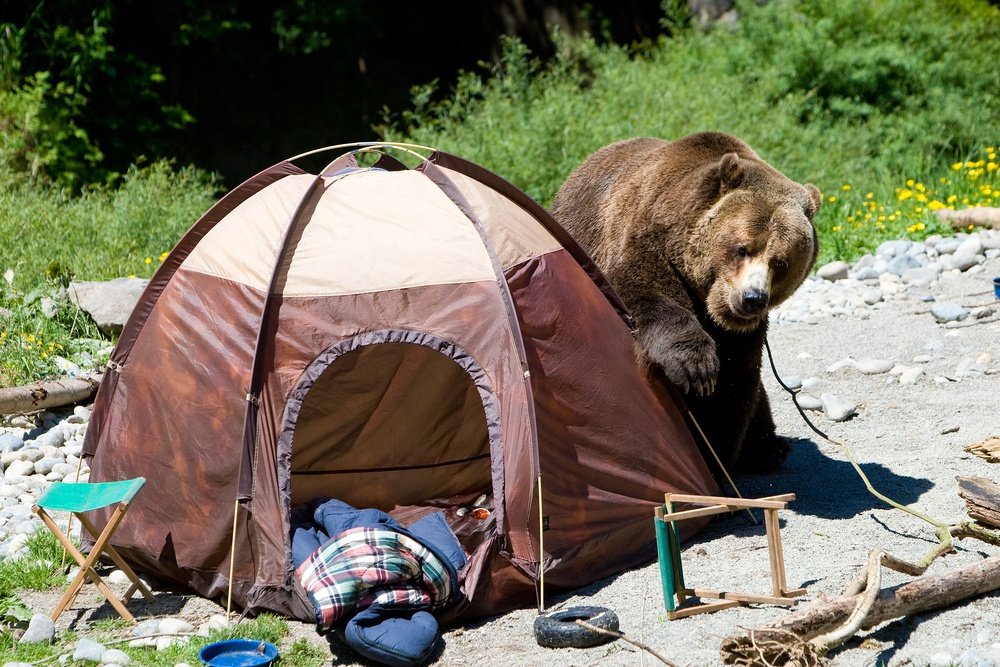 Camping can be a fun and rewarding activity, as long as you remember that you’re sharing your space with the local wildlife. Prevent animals from ruining your trip by using the following tips.

Before you go camping, you should call the campground, park rangers or forest service to find out what kind of wildlife you could be dealing with. They’ll not only have first-hand knowledge of the local animals, but they’ll also have advice for avoiding them. Once you know what you’re up against, you can do your own research on how to prevent them from getting into your campsite.

There are a few things to look for when you’re choosing a campsite. First, you don’t want any standing, stagnant water within 200 feet of where your tent will be. Still water attracts insects and can be a breeding ground for bacteria.

Second, you’ll need somewhere to hang up your food. We’ll get into the specifics of that later, but in general, you want at least one tree with a sturdy branch that’s 20 feet off the ground.

Third, make sure there aren’t any dead trees or logs in the campsite. Dark, damp places are perfect habitats for snakes and spiders. If it’s impossible to avoid them, you can ask the campground to clear them away from your tent spot or use heavy gloves and thick boots when removing them yourself.

The number one cause of campsite visitors is food. Animals who live near campgrounds know that they’re an easy source of food, so even the smallest, slightest odors will attract them.

Use food storage containers that are made to keep animals (specifically bears) from getting into them. You can find bear bags and canisters that are designed to prevent claws from opening them. If you don’t have the budget for that, you can use a regular cooler. Just make sure it locks shut and bind it closed with rope or bungee cords.

Make sure your tent is at least 200 feet away from your cooking and eating areas. Even after you’ve put food away, the smells will linger in the area. If they attract animals, you want to make sure your sleeping space is as far away from them as possible.

Change your clothes before going to bed. Anything you’ve worn while cooking, eating, or handling food will retain that food smell for much longer than you’d expect. After you change, keep your dirty laundry in a locker or smell-proof container. Also, check your pockets to make sure you don’t have anything in them that could give off an attractive smell.

Food isn’t the only enticing smell that attracts wild animals. Anything that has a sweet, unnatural scent will lure animals in. Examples are toothpaste, deodorant, citronella, lotion, and shampoo. The best prevention is to forgo these items altogether, but that might make you unpopular with your fellow campers. If you’re going to use them, try to restrict it to the morning. And if you’re brushing your teeth in your campsite, don’t spit the toothpaste on the ground.

Double bag your garbage, or use odor-eliminating bags (but not the scented kind!) to reduce the smell of your food waste. Anything that’s even remotely related to food needs to be secured this way, including paper towels and disposable cutlery.

Never eat in your tent. You’ll never be 100 percent sure that you’ve gotten rid of all the crumbs. Or the smell will cling to the fabric of your tent and sleeping bag.

Don’t keep food in your car either. It can still attract animals even if the doors are shut. They can damage your vehicle in their attempts to get in to get a snack.

Keep your campsite spotless. Leaving food unattended for even a few minutes is dangerous. Wash your dishes and cookware thoroughly, both before and after using them. Even if they’re clean immediately after washing, it’s still possible for mice or insects to get into them while you’re not using them.

If, after following all of these recommendations, you’re still concerned about a lingering food smell, you can use dryer sheets in your tent to keep animals at bay. The scent masks food smells, and most of the scents are unpleasant to wild animals.

As we mentioned before, you’ll want to hang up any containers you’re using to store food, as well as your garbage. Make sure the tree or pole you use is 200 feet or further from your tent. Hang up the items, so they’re at least 15 feet off the ground. Some animals, including bears, will still be able to reach them, but at least they’ll be a good distance away from where you’re sleeping.

Spread out your food. Don’t hang up it all up in the same tree as someone else’s stash. Keeping all of it in one place creates an inviting target for a hungry animal.

Keep your campsite well-lit while you’re awake at night and make some noise. Don’t annoy your neighbors, but making the usual human noises will make skittish animals think twice about coming near. Nocturnal animals will also generally shy away from light.

Secure all of your supplies not just the food. Persistent animals such as bears and raccoons will tear through everything to try it. Keep shiny objects out of sight as they’re likely to attract raccoons and other curious creatures.

Check your tent every morning and every night to make sure there aren’t any rips or tears. Also, test the zipper to ensure that it doesn’t have any gaps. If insects or rodents come into your campsite, they’ll find any possible opening to get into your tent.

Keep your pets, even well-behaved ones, on a leash or in your tent at all times. Bears, coyotes and mountain lions can quickly take down a dog, regardless of how big the dog is. Keep an eye on your children as they’re easy targets as well.

Dealing with the Animals You Meet

Following all of those preventative measures should keep the wildlife far away from you, but it’s still possible you’ll come across an animal while you’re hiking or exploring. You should learn how to handle these encounters before your trip.

While most species of bears are too skittish to get near you, those that live near campgrounds are used to humans being a possible food source. Some bear facts that might keep you safe are:

Whenever you spend time outdoors, it’s possible you’ll come across a snake. It’s important to learn how to keep snakes away or to deal with a sudden encounter.

Though skunks are mostly harmless, they’re capable of causing a big stink (literally) on the trail and in your campsite. Learn how to keep skunks away with these tips.

The key to keeping your campsite safe is to avoid making it a ready source for food. Don’t encourage visitors to your site that may harm you, your family or your pet. The smart camper also knows what to should they encounter wildlife. That way, everyone can have an enjoyable outing.