Into the Wilderness With A Springbar Tent For Adventures

If you are considering the purchase of a new tent for adventures on your own, with your family, or with a dozen friends, you likely want to know whether the tent you choose can stand up to whatever you throw at it. Springbar tents have been around since the 1940s and are branded as the “Best Tent Made in America,” but that says little about the quality you can expect from one of the company’s many tents. In this article, we will look at all the things that matter to you in deciding whether Springbar is the right manufacturer for your needs.

What Types of Tents Does Springbar Offer?

There are many different collections of tents under the Springbar name. These include the Compact, Highline, Deluxe, and Vagabond Series. All of them are manufactured using durable canvas, which also makes them more affordable than some luxury tent brands. Below we’ll look at some of the pros and cons of the tents in each series to give you a better idea of what you can expect. 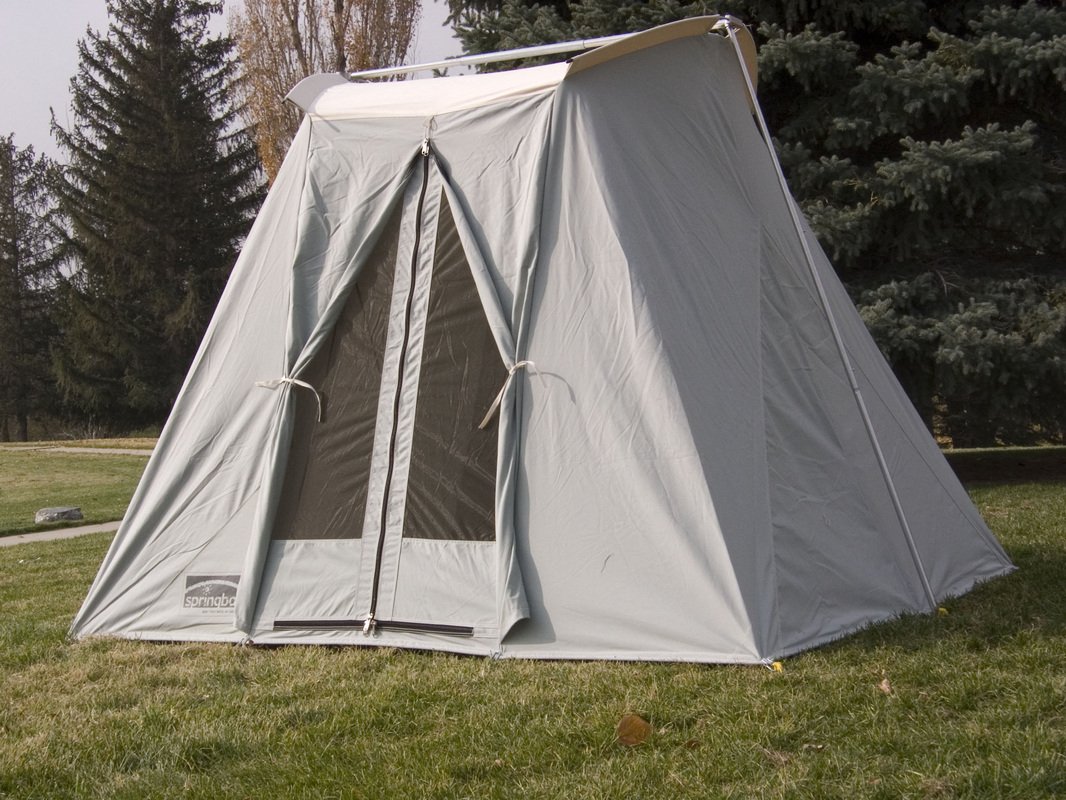 The Compact Series offers two different tents, one that sleeps a couple and one that sleeps three people at once. Either of the two has a zippered door on both sides of the tent, which makes entry and exit simple. The tents also come with poles and stakes for setting up the tent. The vinyl floor can help protect against water, which is excellent if you plan to camp near a lake or ocean. The tents are made in the USA and come with a limited lifetime warranty.

The main disadvantages we have uncovered are that you have to dry the tent thoroughly before you store it away after a trip. It is also not the type of tent that works well if you are going backpacking. It is best for other ventures. If you plan to backpack, another brand will probably suit your needs better. 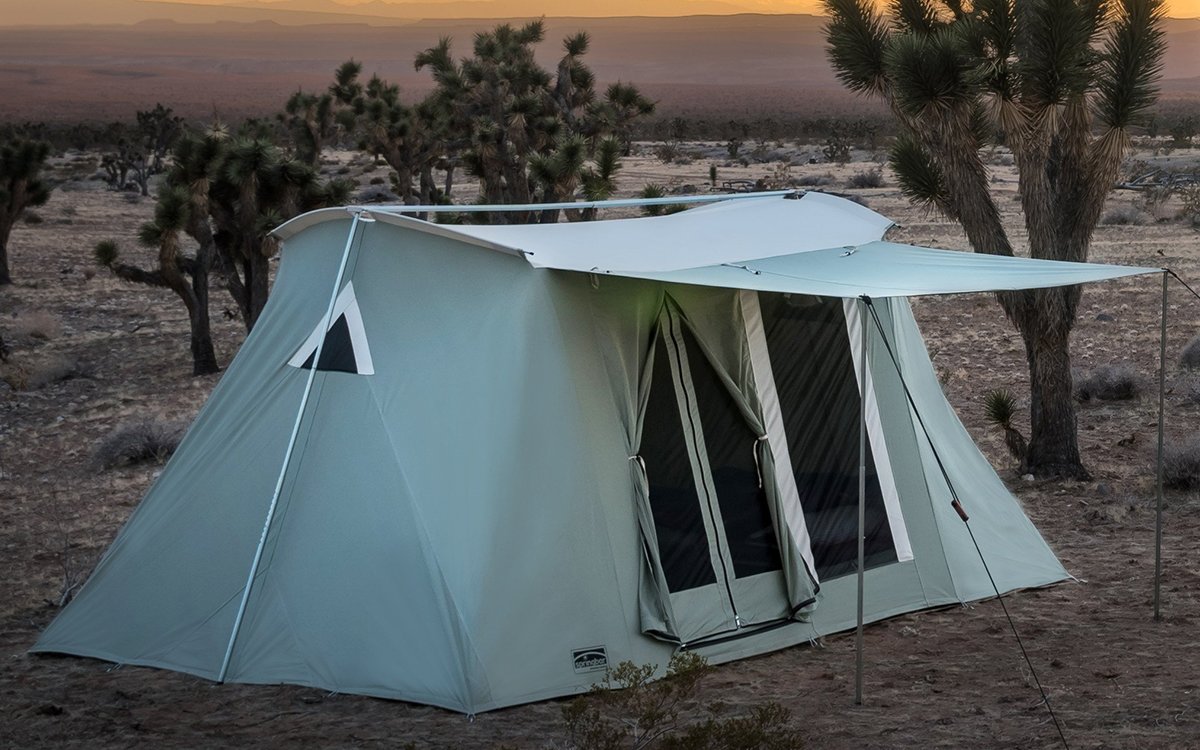 If you are camping in the forest with a handful of friends, this Highline Series is going to be better than the former series. The Highline tents can sleep six to eight people, depending on the version you choose to purchase. For those of you who hate putting up a tent, you will likely appreciate this simple one-person setup that makes getting the tent up and functioning quicker than you would expect. The eight-person version also comes equipped with the tent, an awning, poles, steel stakes, ropes, and an adjustable gear loft.

This tent series is imported, which might be a problem for some people out there. It also has a lifetime warranty, but it is limited, so it is essential to read the details about that policy and avoid ending up without a replacement if something goes wrong with the tent. The tent is best for family camping, base camping, or car camping. 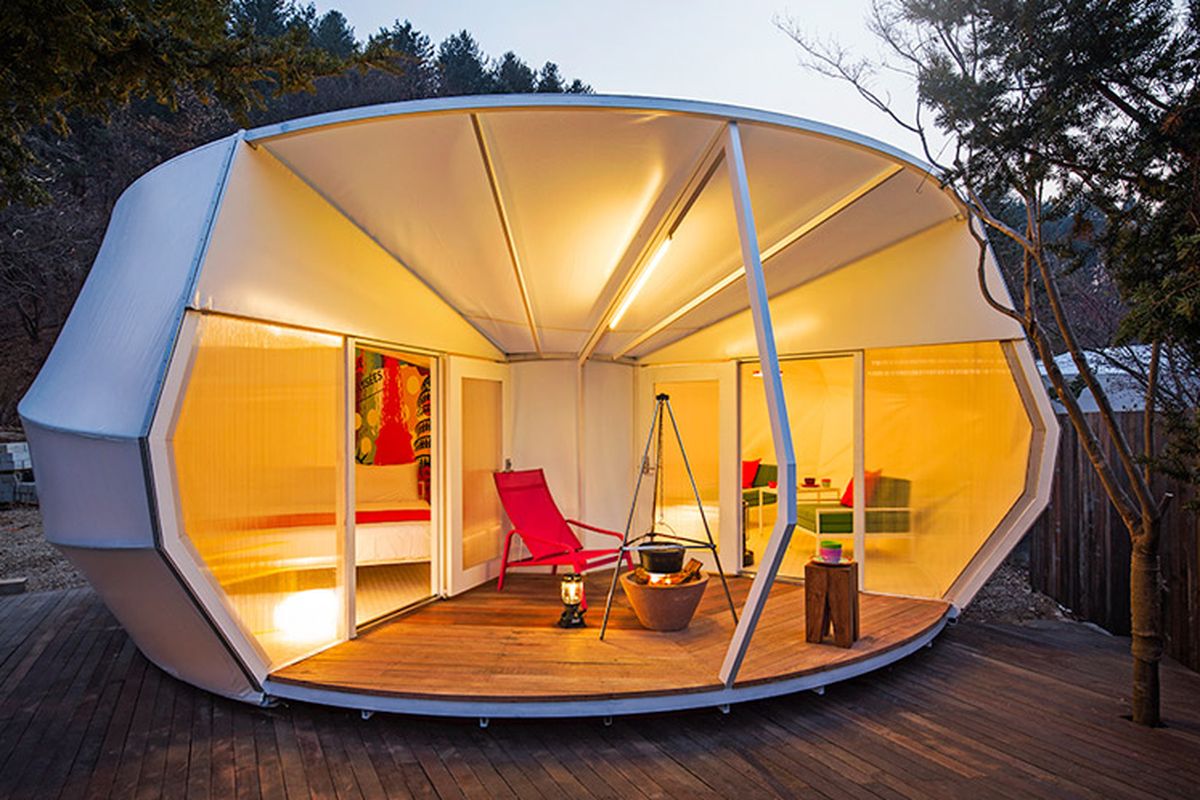 The Deluxe Series is a bit different than the series we have already mentioned in that it comes in a three-person, five-person, or seven-person style. Like the Compact Series, these tents are manufactured in the United States. The reason these are considered deluxe probably comes from the fact that they offer a screen door, a large back window, and an area for ventilation to come in. The rope that comes with this tent is stable and can keep the tent up no matter what weather comes along.

You can add other accessories like an awning or doormat, but those cost extra and do not come with the tent. This is also another example of a lousy tent for backpacking. It is great for nearly any other sort of camping, but it is too heavy and large to carry around with you while hiking through the wilderness. 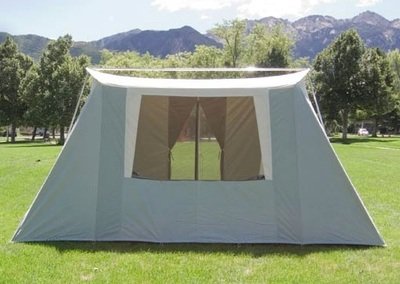 The last series option is the Vagabond Series, which can sleep four or seven people. This is often recommended for use by large groups, such as Boy Scouts. It is less expensive than some of the other Springbar tent offerings by removing some of the luxury extras. It does come with a back window and a strong floor that can take a beating from numerous people coming in and out throughout the day.

If you want luxury, this is not the right tent for you. It is stable and sturdy, but it is not the most beautiful tent, and it does not come with an awning or extra windows or even a screen. However, for budget-conscious consumers, it might be a great deal. It includes a limited lifetime warranty and many repair options.

One of the things that makes a Springbar tent unique is that the company has a long, illustrious history. The company was launched in 1944 and was named Kirkham’s Outdoor Products. At that time, the company sold tarps, awnings, tents, and even horse blankets. Tents and other camping items really took off which led to a specialization in that area. These tents date back to the 1960s when the first tent frame was produced. The business expanded in 1978 and again in 2002. The company offers not only tents, but also footwear, travel gear, and other apparel.

There are numerous accessories and replacement parts available directly for Springbar tents. These range from ground tarps to shade attachments, zip-in panels, closets, stakes, and even doormats.

When it comes to comparisons, we ranked Springbar against the other major players in the tent world. The first of those comparisons had to be against Kodiak, another major tent manufacturer who some claim has tailored their tents off the ones offered in the Springbar line.

Kodiak has tents with similar features to the ones offered by Springbar. They both have a similar canvas material with nearly the same waterproofing, weave, and weight. The poles are also almost indistinguishable from each other. The main difference is that Springbar has telescoping uprights that are sturdier than the ones by Kodiak. Both brands have heavy-duty floors with water resistance and use the same highly-rated zippers.

All in all, the two tent brands are neck to neck, but Springbar is a smidge better in some areas. It is also worth noting for those who care about buying United States-made products that most of the tents by Springbar are made right in the States, while Kodiak uses Chinese manufacturing.

Oz is another manufacturer of tents that is becoming more well-known as of late. They offer canvas tents, as well as tents made of polyester. The polyester tents are some of their less expensive offerings, which is no big surprise since that material is far less durable than canvas.

The tents by Oz are quality but don’t stack up to what Springbar offers.

When it comes down to it, a Springbar tent is an investment in the future. If you are the sort of person who spends a lot of time outdoors, enjoys camping in nature, and appreciates fishing or hunting, Springbar can provide a high-quality tent that may last for decades. If you want a tent for one or two camping trips over the next decade, something more affordable might be the better option for you.

Any way you cut it, Springbar provides a product that is high-quality. The fact that so much care is taken to offer a great product, whether you are looking for luxury or the basics, isn’t something every tent manufacturer out there can promise. The decades of experience behind the company points toward this tent being one that you can count on.

In the end, we vote for the Springbar tent as a fantastic option for most people. We would suggest it over Kodiak, Oz, or other major manufacturers on the market today. 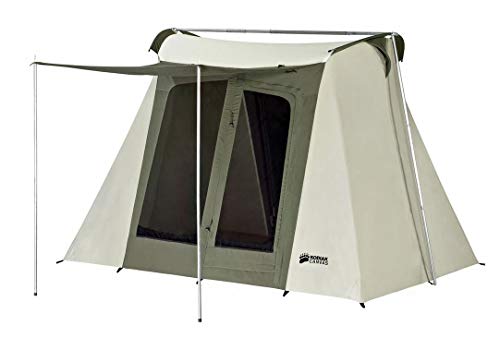 Find the Best AA Flashlight for the Outdoors!

Best Keychain Flashlight to Keep You Safe in the Dark

Choose the Best Camping Cot for the Outdoors!